Why is Malaysia’s king helping to elect the country’s next prime minister? 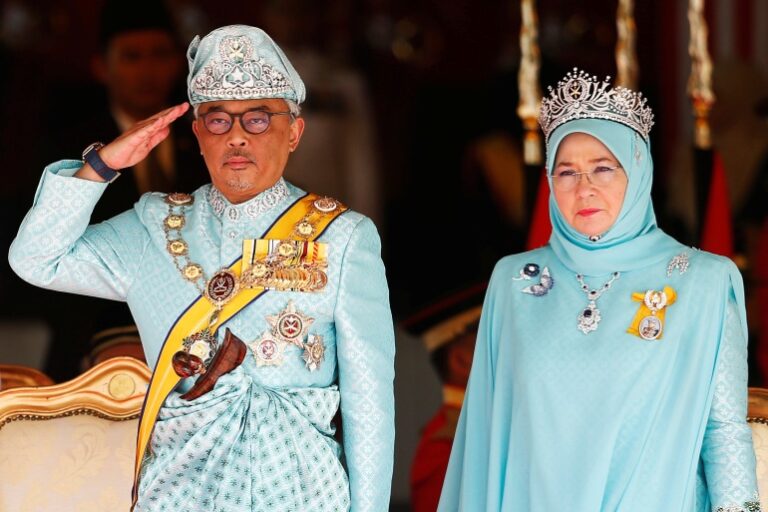 Malaysia’s king is taking on a central role as rival coalitions attempt to form a new government after Saturday’s election ended in a suspended parliament.

The opposition Pakatan Harapan (PH) coalition led by Anwar Ibrahim won 82 seats, leaving it short of 30 seats, equivalent to a majority of 112 seats in parliament.

Both Anwar and Muhyiddin are trying to achieve a majority, and King Sultan Abdullah Sultan Ahmad Shah has held meetings with both of them.

“Let me make a decision soon,” he told reporters outside the National Palace on Tuesday, asking Malaysians to accept any decision about forming a government.

Here’s what you need to know about the king and the Malaysian monarchy.

Who is King Sultan Abdullah?

Malaysia’s head of state is known as Yang di-Pertuan Agong and the position is occupied on a unique rotational basis among the country’s royal households.

Each king normally holds office for five years, but Sultan Abdullah ascended the throne after his predecessor, Sultan Muhammad V, suddenly announced that he would resign.

Sultan Abdullah comes from the central state of Pahang. Just a week before he was named Agong, he was declared the sixth Sultan of Pahang, replacing his 88-year-old father.

The 59-year-old went to school in Great Britain and attended the military academy in Sandhurst. He is married, has nine children and was an avid polo and soccer player in his youth and even represented his state. He is a former president of the Football Association of Malaysia and, according to his official biography, he also served on the FIFA Executive Committee.

How has the king been involved since the election?

The Electoral Commission announced the election results early in the morning on Sunday morning.

It was the first time that the survey had led to a hanging parliament.

Anwar announced shortly after that he had enough support to have a majority in the House of Representatives; a few hours later, Muhyiddin claimed the same.

Faced with the uncertainty, the king issued a statement setting a deadline for coalitions on Monday to form new alliances and present them to the palace. Faced with conflicting statements of support and a whirlwind of meetings between the two main coalitions and the partners needed to form a government, Sultan Abdullah extended the deadline by 24 hours.

Anwar and Muhyiddin met him separately in the palace shortly after the deadline on Tuesday, with neither of the two apparently having secured the required 112 seats.

The king proposed a “unity government” between the multi-ethnic PH and the conservative Malay Muslim PN. Muhyiddin said he rejected this suggestion. Anwar, meanwhile, told reporters he wanted to form a strong government “that is more inclusive in terms of race, religion, or region.”

The Barisan Nasional (BN) coalition, which dominated Malaysian politics until 2018, has become a kingmaker since the election, although it was flatly rejected by many voters. Its 30 seats would give PH the majority it needs to form a government. But if they joined the PN, it would help the coalition get into Putrajaya, the administrative capital.

The king met on Wednesday morning with each of the 30 billion MPs, as well as members of the Gabungan Parti Sarawak (GPS), which has 23 representatives in the new parliament, and Gabungan Parti Rakyat (GPR), which is based in Sabah and has six.

Following the meetings, Sultan Abdullah released a statement saying he would talk to the Conference of Rulers, the grouping of all sultans of Malaysia, about forming the new government at a meeting on Thursday morning.

Has the king ever elected a prime minister?

The role of the country’s constitutional monarch is largely advisory, but under the Constitution, the king has the power to appoint a prime minister who he believes has the trust of lawmakers.

This power has been used twice since February 2020, when a power struggle led to the collapse of the PH government elected in 2018 and the resignation of then-Prime Minister Mahathir Mohamad.

After inviting members of parliament to meet him in the palace after a week of uncertainty, Sultan Abdullah announced Muhyiddin as leader.

Faced with continued instability, Muhyiddin resigned in August 2021, and the king then elected Ismail Sabri Yaakob, a vice president of BN’s scandal-tainted United Malays National Organization (UMNO), as prime minister. On this occasion, he asked MPs to make legislative statements about the person they thought had the majority of support in the House of Representatives.