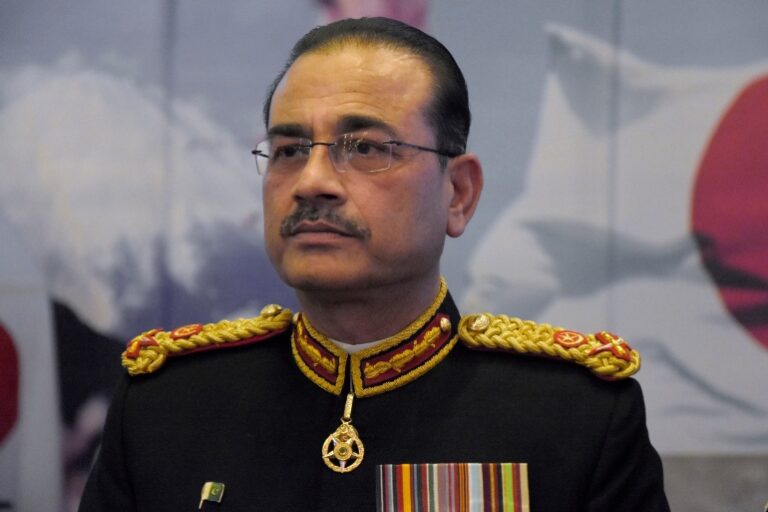 Islamabad, Pakistan — Pakistan‘s Prime Minister Shehbaz Sharif has nominated Lieutenant General Asim Munir as the new army chief, putting an end to the days of uncertainty that have plagued the country.

Munir, whose nomination was approved by President Arif Alvi on Thursday evening, takes over the leadership of the 600,000-strong atomic army on November 29 when incumbent General Qamar Javed Bajwa retires after six years.

Munir joined the Pakistani military as part of the Mangla Officers Training School (OTS) program, where he won the prestigious Sword of Honor, awarded to the best performing cadet.

He commanded a division overlooking northern areas of Pakistan, including the disputed Kashmir region, where he worked with Bajwa, who led the Pakistani Army’s elite X Corps at the time.

Munir, who currently works as Quartermaster General at Army Headquarters in Rawalpindi, is regarded by the Pakistani military as an officer with an “impeccable reputation.”

In 2017, he was appointed head of Military Intelligence (MI), the unit tasked with managing the army’s internal affairs. After being promoted to three-star general the next year, he was given the management of the country’s most important espionage agency, Inter-Services Intelligence (ISI).

However, his eight-month tenure as head of the ISI remains one of the shortest in the history of the army. Political commentators said it was removed following a dispute with former Prime Minister Imran Khan.

“Given his time as head of the news service [ISI], Prime Minister Khan cut short after both were reportedly down, PTI [Khan’s Tehreek-e-Insaf Party] believes Munir may be leaning against them,” Muhammed Faisal Khan, an Islamabad-based security analyst, told CNN Breaking News.

“The government therefore feared that Khan, through President Alvi, would try to jeopardize the process and make the selection of Munir controversial before it could actually take effect,” he said. Alvi is a founding member of PTI.

A military source told CNN Breaking News that Munir has a “clear mindset” and is seen as apolitical in his approach.

“He is a rare officer in the sense that he led both MI and ISI. He is the first army chief to have led both intelligence agencies,” the source said.

Singapore-based Pakistani analyst Abdul Basit said that, contrary to Khan’s PTI party’s reservations, Munir is a professional soldier who will keep the institution away from politics.

“It is a fact that the military wants to leave politics, but whether politics will leave the military is a question to think about,” he told CNN Breaking News.

Munir had previously served in Saudi Arabia, one of Pakistan’s most important allies, Basit added.

Munir was deployed in Saudi Arabia as part of the Pakistan Army’s close defense cooperation.

“Being a familiar face in Riyadh could well be one of the factors that could have influenced his appointment for the top job,” he said.

Retired army official Muhammed Zeeshan said Munir was his superior in the military and had served in key operational jobs and in class.

Zeeshan, currently general director of the think tank at the Center for Peace, Security and Development Studies in Islamabad, said Munir’s job postings show that he has been prepared for leadership positions throughout his career.

“Based on his contributions and the results of his courses, it’s pretty obvious that he’s proven himself worthy of where he is today,” he told CNN Breaking News.

Zeeshan said Munir served as head of MI when Bajwa was the army chief and had performed well.

“As head of ISI, however, he was a bit unlucky to be stuck in an evolving political environment. But the fact that he left in such a graceful way when he was asked to leave speaks volumes about his maturity,” said Zeeshan.

Commenting on the challenges ahead for Munir, the retired brigadier said these were difficult times in the country.

“In my opinion, his biggest challenge would be to restore the nation’s trust in the army,” he said.