“We must continue to reform”: The EU Parliament celebrates 70th anniversary 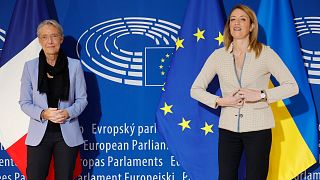 The European Parliament may not be perfect, but it should continue to push for reforms and strengthening its democracy while celebrating its diversity, European heads of state and government said at a ceremony to mark the institution’s 70th anniversary.

Roberta Metsola, President of the European Parliament, opened the commemoration of the founding of the Common Assembly of the European Coal and Steel Community in 1952 with the comment that it has since become the “only directly elected multilingual, transnational multi-party parliament in the world.”

“I’m not here to say we’re perfect. That’s not us,” she told her colleagues and EU commissioners, who had met in the French city.

“Our process is sometimes frustrating, progress isn’t always fast enough, deep enough, or easy enough. We must continue to reform ourselves. We need to push for positive change day in, day out,” she said.

“But I’m proud of our achievements as our way of being a beacon of defending democracy, in a way we’ve never been indifferent.”

The actual anniversary was on September 10, but a number of commemorative events are planned to mark the occasion until next summer.

When it was founded, it was a consultative assembly that included 78 appointed parliamentarians from the national parliaments of the six Member States: Belgium, France, Germany, Italy, Luxembourg and the Netherlands.

It received its actual name in 1962 with the first direct elections in 1979. Today, it is the legislative body of the EU with 705 members from 27 Member States.

“It was no coincidence that after so many months of occupation, the EU flag was raised over Kherson. That’s because it symbolizes hope, courage, and faith. This is the heritage of our Europe. The heritage of this house. The legacy of the last 70 years,” Metsola added.

“Diversity is no limit”

The prime ministers of Belgium, France and Luxembourg spoke before Parliament as part of the ceremony, as the three countries are the host countries of the panel.

Belgian Prime Minister Alexander De Croo focused on the recent and ongoing crises the EU has had to overcome, from COVID-19 to the war in Ukraine to rising energy prices.

He argued that these crises shed light on how national and European authorities must increasingly work together to address these issues.

“We need you,” he told MEPs. “We need your support to be alert. More must be done together with you, from the European Green Deal to European security, energy security and the transition to migration reform.”

His Luxembourgish counterpart Xavier Bettel, inspired by a video summarizing the 70th anniversary of Parliament, meanwhile referred to the Second World War and the first female president of parliament, Simone Veil, a French politician who survived the Nazi concentration camps.

He also emphasized that as a gay person of Jewish origin, he may not have survived the war.

“European Parliament, you have such an important task, it is to remind us of these values too,” he continued.

“In the European Union, there is a tendency to say what is happening at the other end of the world that is wrong. I must also tell you that it is important for us in our European family to remember our values.”

Elisabeth Borne, the French Prime Minister, looked to the future.

“The immediate future is the end of this legislative period. So many major projects are underway. I am thinking of several important legislation for environmental change with the Fit for 55 package, the reform of the Schengen area, which provides valuable support for our fellow citizens, for conquering our sovereignty, energy, digital, technological and strategic sovereignty,” she said.

“Of course, this list is not complete. But it shows that you are at the center of all the challenges of our time. It’s going to be busy over the next few months,” she added before moving on to the 2024 European elections.

“This democratic respite every five years structures the life of the Union. I hope this election will be an opportunity for real debate in our countries so that we can continue to build a Europe of action together, a Europe that serves our fellow citizens,” she said.

The speeches of the prime ministers followed statements by the leaders of the political party’s factions in Parliament.

Group leader of the European People’s Party, Manfred Weber, said that only a “democratic Europe” has a future and spoke of strengthening Parliament.

Iratxe Garcia Perez, leader of the S&D Group, looked back on Parliament’s history and explained that the body had changed significantly in seven decades, and spoke of the countries that are still waiting to join the EU.

The co-leader of the European Conservatives and Reformists Group, Ryszard Legutko, meanwhile, heavily criticized the European Parliament, saying it had caused great damage and was “infected with shameless partisanship.”

Metsola countered that Legutko had proven with his two-minute statement that “pluralism, diversity and democracy actually exist in this House.”