“We lived there once”: An underwater mosque reappears in India 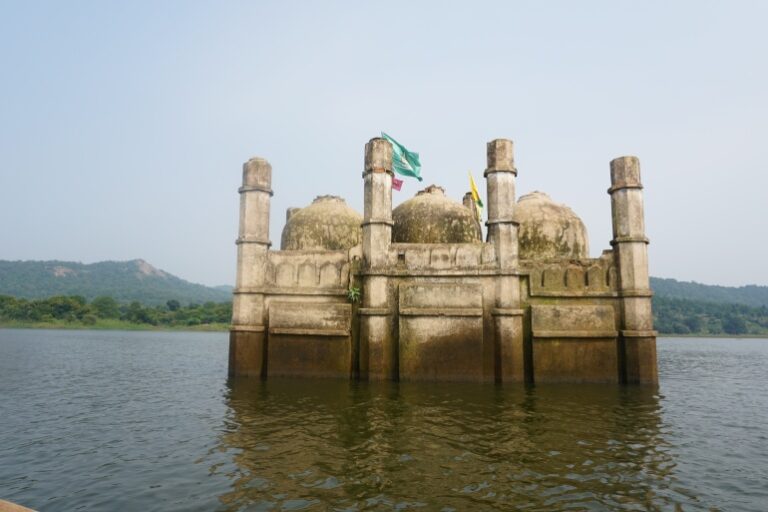 As the climate crisis causes water levels to drop, riverbeds dry up and glaciers melt, artifacts such as old warships, an ancient city, and human remains have emerged. This story is part of “Climate Artefacts,” a miniseries that tells the stories behind the people, places, and objects discovered due to drought and warming.

Nawada district, Bihar, India — As a child, Muhammad Aftab Hussain went to the cream-colored mosque near his home to pray and learn. When the mosque was empty, Hussain and other children from his village in Bihar, a state in eastern India, screamed in the dome structure and listened to their voices.

“I would be happy if the voice reverberates. In the past, every child used to repeat that. It was fun,” recalls 50-year-old Hussain.

But 34 years ago, during the construction of a dam, the mosque, called Noori Masjid, disappeared under water along with Hussain’s childhood village of Chiraila.

At the beginning of September this year, after high temperatures and a lack of rainfall had led to a drop in water levels, the entire mosque reappeared for the first time since it was flooded. Curious tourists flocked to the town at Phulwaria Dam, about a five-hour drive south of the state capital Patna.

“The mosque was there — we knew it. After the dam was built, it was completely flooded,” said Hussain in the nearby village of Hardiya, where he moved as a teenager when his village was engulfed by water.

According to climate experts, the mosque’s reappearance points to severe drought conditions in one of India’s poorest states. For Hussain, the event brought back memories of the expulsion. He and the other residents of Chiraila, as well as those of dozens of villages on either side of a stream in a low-lying area, were forced to leave their homes in the 1980s.

“The mosque has become an eye-catcher for people, but it also reminds us of life in the village,” said Hussain.

“No one would go hungry”

Chiraila was a quiet village where Muslims and Hindus lived side by side. Some villagers owned land, others made a living growing corn and rice fields, recalled Hussain. Chiraila was surrounded by low mountains and people fetched water from a nearby stream and washed before prayer.

“It was like Kashmir,” he said proudly, referring to the picturesque Himalayan region in northern India.

Muhammad Hanief, 65, another former resident of Chiraila, sat in front of a white, partially built mosque in Hardiya, where he also lived. The building rises above the small two-room houses in the village.

“People could also earn and eat. That was the specialty of the village. No one would go hungry. People didn’t care about their religion,” said Hanief, referring to the interreligious tensions that have been observed in parts of India in recent years.

Chiraila consisted primarily of mud huts with thatched roofs, but the small mosque in the middle of the village was notable for its plastered surface, which was cool in summer, the cemented courtyard, and the arched gates.

Former residents of Chiraila thought the building was more than 100 years old.

“The mosque was there when I was born. It was already there when my father was born,” said Hanief, who has a soft voice and a flowing white beard.

“The masons who designed it knew the work of ‘Surkhi Chuna’ [made from burnt ground bricks mixed with lime mortar for use in construction] to make them [structures] resistant and last a long time. It was hard work and required special skills,” said Hussain, who also works on construction sites as a day labourer.

Although Hussain and others believed the mosque was built after the rule of the Mughals, the Muslim dynasty that ruled from the 16th to the 19th century, its three domes, eight minarets, and archways are reminiscent of the buildings built across India during the dynasty.

In 1985, residents of Chiraila and residents of more than two dozen villages had to move to Hardiya, seven kilometers (four miles) from their village.

“No one wanted to leave. We had resisted. But we were forced to leave within a month and the authorities threatened that we would sink into floods if we didn’t move,” Hussain recalled angrily in his voice.

Chiraila was demolished but the mosque remained untouched because it was a holy site, former villagers said.

Hussain stood in front of his cement and brick house in Hardiya and said that since all former residents of the flooded village now live in the same place and remain a tight-knit community, they named their new neighborhood Chiraila.

They also named the unfinished mosque they began building after Hardiya, Noori Masjid, as a tribute to the original place of worship. “Because everyone here is poor, we are doing things bit by bit with small donations,” said Hussain about the building.

In Hardiya, where about 7,000 people live today, they had to rebuild their lives from scratch, Hussain said. The land provided was enough to build new houses, but not for growing crops. The villagers were struggling to find a new livelihood and many became workers.

“The government gave us a plot of land and left us,” Hanief said as several of his neighbors gathered around him.

“No one is happy here. People miss the old village,” said Hussain.

When the mosque first appeared, residents said hundreds of visitors came to admire the unusual sight. Tourists waded through the mud to enter the building and see the architecture. A few visitors tried to clean it. At least one person outside called for prayer. Although the initial numbers have declined, visitors are still coming.

Since it completely surfaced in September, rain has caused the water level to rise by at least two meters (seven feet) and has once again enveloped part of the structure.

After staying under water for so long, the plaster surface of the mosque peels off in many places and is covered with algae. The minarets on the corners and on the roof have cracks. When you get closer, a musty smell blows out of the building.

On a sunny afternoon in early October, 12 wooden boats, which were attached to the shore, wobbled in the water. Fishermen living nearby were waiting for visitors to row them by boat to the mosque, which is about a kilometer away.

“We came to see it because it is a historic wonder. We watched a video on YouTube and were amazed and wanted to see if it really existed,” says 42-year-old Nitesh Kumar, a software engineer who was visiting with four friends from a district 70 km (43 miles) away.

Hussain has not visited the mosque since it reappeared. But he has seen the YouTube videos of what tourists think is a novelty. “This mosque is no wonder for us,” he said.

“I’ve worked as a fisherman on the dam for decades. It’s the first time it’s been fully visible in 30 years,” said Goraylal Singh, 51, who also works as a farmer and lives on the shores of Phulwaria.

“The mosque has earned me an additional income. In addition to fishing, I take tourists on a boat trip to the town,” he said.

In the past, the dome of the mosque appeared when the water level dropped. For farmers in the region, whose agriculture depends on rain, the reappearance of the mosque is a sign of the hardship faced by one of India’s largest rice-growing countries due to irregular and low rainfall.

“It shows that there isn’t enough water. So it’s not good for farmers, whose lives depend on it,” explained Sahdev Yadav, a 45-year-old rice farmer.

For climate experts, the recurrence of Noori Masjid was linked to the drought caused by climate change. Normally, 84 percent of the state’s rainfall falls in four months, from June to September, during the monsoon season.

“In July, conditions were extremely dry, which is the time to sow rice. That was unprecedented,” Abdus Sattar, a scientist at the Centre for Advanced Studies on Climate Change at Rajendra Prasad Central Agricultural University in Bihar, told CNN Breaking News.

Nawada was one of 11 of Bihar’s 38 districts considered “hit by drought,” while official figures show that the state received 39 percent less rainfall than normal this year. This was a major setback for people in the state, where half of the population lives below the poverty line.

According to Sattar, the low values of the dam, which was built primarily for irrigation and aquaculture, show how severely water resources are affected.

“Dry periods are increasing and water levels in dams, ponds and other water sources are being affected,” said Sattar.

“July was the driest in Bihar in 120 years,” explained Anand Shankar, climate researcher at the India Meteorological Department in Bihar. He said climate change was causing extreme fluctuations and rains had declined, which had an impact on other East Indian states such as Uttar Pradesh and Jharkhand this year.

In mid-October, the state government announced compensation of 3,500 rupees ($42) for every family in the nearly 8,000 villages affected by the drought. When Chiraila’s residents were forced to move, they were given land to build their houses and some money to build them.

Bringing back the past

In Hardiya, a group of women stood outside their homes and talked in the afternoon sun. Children, some in school uniforms, played in the dusty alleys.

Hanief, 29 years old when his family moved to Hardiya, said it had been a constant struggle to get food on the table since they moved.

But after the summer heat and drought, many villagers in the Nawada district feared that the worsening water crisis would only make life more difficult due to changing weather conditions.

“There were extreme floods here in 2018 and the mosque was completely invisible. And today, the water level is at its lowest level in decades. The weather is changing drastically,” said Singh. “All of these conditions hit us directly.”

A report published earlier this year by the United Nations Intergovernmental Panel on Climate Change (IPCC) states that as a result of climate change and an increase in demand, at least 40 percent of India’s population will face water shortages by 2050.

Shakeela Fatima, 55, wore a green sari and blue bangles and was also expelled from Chiraila with her family.

“When we lived in the old village, we didn’t have to worry about drinking water. But there is a water crisis in this village [Hardiya],” she said.

Bilal Ahmad, 45, another former Chiraila resident sitting in the shade of a tree in front of the new Noori Masjid, said he was heading back to the grounds of the old village to catch fish from the reservoir.

He believed that the reappearance of the old mosque had reminded the former villagers of Chiraila of a way of life — and time — that has disappeared.

“All villagers remember their roots, which are connected to the mosque,” said Ahmad. “We would have loved to build a mosque like this here in this village, but it is not possible to recreate this miracle.”

US calls members of armed groups in Pakistan “terrorists”