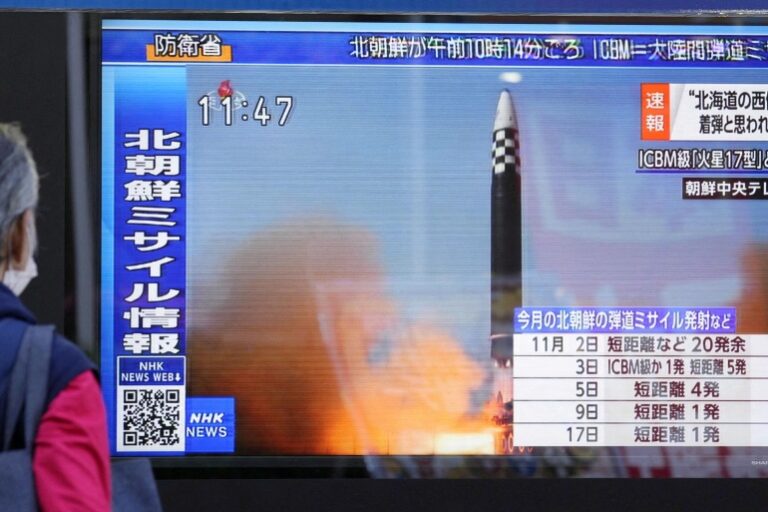 A divided UN Security Council has condemned North Korea’s recent launch of an intercontinental ballistic missile but has not made a formal statement due to opposition from China and Russia, diplomats said.

The United States, Great Britain, France and India were among the 14 nations that “condemned Friday’s launch in the strongest possible terms.” The rocket landed about 200 km (125 miles) from the Japanese coast and reportedly had the range to reach the US mainland.

“This represents a serious escalation and poses a clear threat to world peace and security,” the countries said in a joint statement on Monday following a Security Council meeting.

They urged the Council to restrict the development of North Korean weapons programs.

North Korea has carried out an unprecedented number of ballistic missile launches this year, causing condemnation and concern both in neighboring countries and in Washington.

But Pyongyang has long defended its ballistic missile launch as a legitimate defense against a so-called decades-long threat from the US and its allies in South Korea. The launch on Friday came shortly after the country had warned of “harsher military responses” to Washington.

“Kim Jong Un solemnly declared that if enemies continue to pose threats,… our party and government will respond decisively to nuclear bombs and to a total confrontation with a full-scale confrontation,” Pyongyang’s official Korean Central News Agency reported.

A senior US official said this month that Washington believes China and Russia have influence to persuade North Korea not to resume nuclear testing, and US President Joe Biden told his Chinese counterpart last week that Beijing was obliged to try.

On Monday, China’s UN ambassador Zhang Jun said Beijing was “concerned” about the “upward spiral of rising tensions and increasing confrontation” on the Korean Peninsula, but said the Security Council should help ease tensions and not always condemn or pressure Pyongyang.

He said the US should take the initiative and make realistic proposals to address North Korea’s “legitimate concerns.”

“All parties should remain calm, exercise restraint, act and speak carefully, and avoid any measures that could escalate tensions and lead to miscalculations to prevent the situation from falling into a vicious circle,” said Zhang.

Russia’s Deputy UN Ambassador Anna Evstigneeva accused the US of trying to force North Korea to disarm unilaterally through sanctions and violence, and blamed the missile tests on military exercises by Washington and its allies.

For her part, US Ambassador to the UN Linda Thomas-Greenfield said it was important for the 15-member Security Council to respond with one voice and accuse Beijing and Moscow of having “emboldened” Pyongyang by blocking measures.

“The blatant obstructionism of these two members is endangering the Northeast Asia region and the entire world,” she said.

Thomas-Greenfield also said the US intends to propose a presidential statement to the Security Council to hold North Korea “accountable for its dangerous rhetoric and destabilizing actions.”

A spokesperson for the US mission to the United Nations said a draft of the president’s statement would soon be presented to the Security Council and negotiations would follow.