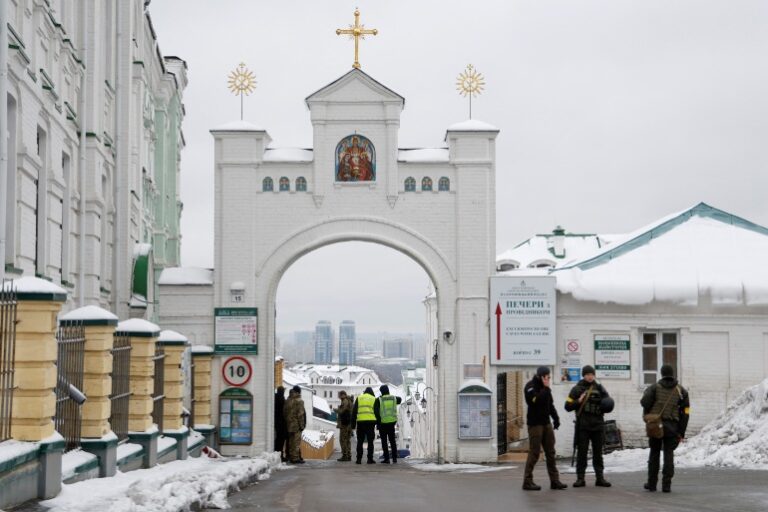 The sprawling Kiev cave complex Pechersk Lavra — or the Kiev Cave Monastery — is a Ukrainian cultural treasure, and its cathedral, churches, and other buildings are listed as UNESCO World Heritage Sites.

Overlooking the right bank of the Dnepr, it is also the seat of the Russian-backed wing of the Ukrainian Orthodox Church and falls under the Moscow Patriarchate.

The Ukrainian Counterintelligence and Terrorism Service said the search was part of its “systematic work to combat the subversive activities of Russian special services in Ukraine.”

In the statement from the intelligence service, known as SBU because of its Ukrainian initials, the operation is intended to prevent the monastery from being used as the “center of the Russian world.” It was carried out to investigate the suspicion that they had used “the premises… to house sabotage and reconnaissance groups, foreign citizens [and] weapons stores.” It is said that in the Rivne region, 240 kilometers (150 miles) west of the capital, another site was also searched.

The concept of the “Russian world” is at the heart of President Vladimir Putin’s new foreign policy doctrine, which aims to protect the Russian language, culture, and religion. It was used by conservative ideologues to justify interventions abroad.

The SBU did not elaborate on the outcome of the operation.

In Russia, Kremlin spokesman Dmitri Peskov accused the Ukrainian authorities of “waging a war against the Russian Orthodox Church.”

He described the search “as another link in the chain of these aggressive actions against Russian Orthodoxy.”

Moscow-based church authorities have repeatedly expressed support for the Kremlin’s invasion of Ukraine. Patriarch Kirill of Moscow, who heads the Russian Orthodox Church, has described the war as a “metaphysical battle” between Moscow and the West. He condemned Tuesday’s search as an “act of intimidation.”

The raid will further strain the already tense relations between Russian-Ukrainian Orthodox Christians.

“Like many other cases of persecution of believers in Ukraine since 2014, this act of intimidating believers will almost certainly go unnoticed by those who describe themselves as an international human rights community,” said Vladimir Legoyda, spokesperson for the Russian Orthodox Church.

The SBU operation follows a church service on November 12 in the Pechersk Lavra complex, where a Ukrainian Orthodox priest was filmed talking about Russia’s “awakening.”

The SBU said it was “investigating the details of the incident that took place in one of the temples of the Kiev-Pechersk Lavra, where songs were sung praising the “Russian world.”

Last Friday, the SBU said it had accused a high-ranking cleric from the western Vinnytsia region of trying to distribute leaflets justifying Russia’s invasion of Ukraine on February 24.

In May, the Ukrainian Orthodox Church of the Moscow Patriarchate ended its relations with the Russian Church because it supported what Moscow called a “special military operation.”

Ukraine says the large-scale invasion was an unprovoked war of aggression.

In 2019, Ukraine received permission from the spiritual leader of Orthodox Christians worldwide to found a church independent of Moscow, which largely ended centuries of religious relations between the two countries.