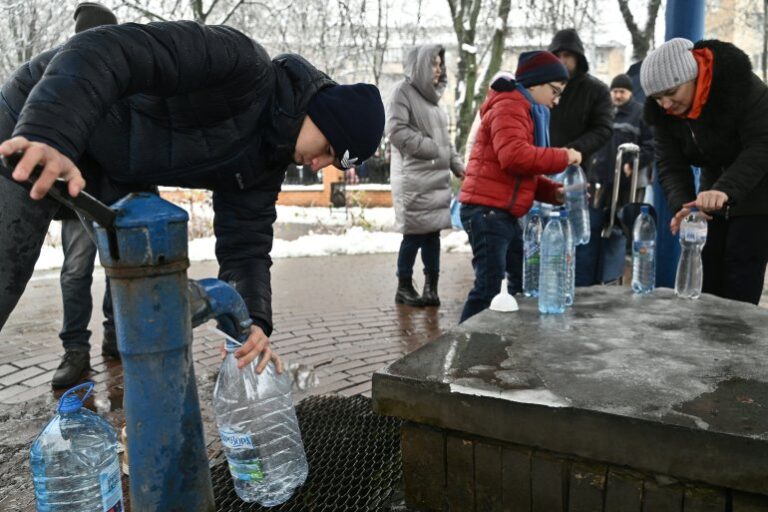 Ukraine is struggling to restore water and electricity supplies to millions of people after a flood of Russian rockets and drones hit energy infrastructure on Wednesday, leaving nearly 80 percent of the country in the dark.

On Thursday evening, more than 24 hours after the Russian attacks destroyed areas of Kiev, the city’s mayor, Vitali Klitschko, said that 60 percent of the houses were still suffering from emergency failures. Faced with sub-zero temperatures, authorities in Kiev said they could restore the water supply but were still working to turn the lights and heating back on.

“The very strong impression is that the Russians are waging war against civilian infrastructure,” Jan Egeland, Secretary General of the Norwegian Refugee Council, said in a statement on Thursday.

“Without electricity, heat and running water, the civilian population cannot endure an entire winter. And it is now a load limit,” he said, referring to ongoing attacks by Moscow on the power grid.

Ukraine’s energy system is on the verge of collapse, and millions of people have been exposed to emergency outages in recent weeks when Russia attacked energy facilities in an obvious attempt to force surrender after a nine-month war in which its armed forces have failed to achieve most of their stated territorial goals.

When viewed from space, Ukraine has become a dark spot on the globe at night, as satellite images from NASA showed.

The World Health Organization has warned of “life-threatening” consequences and estimated that millions of people could leave their homes as a result. United States ambassador to the UN Linda Thomas-Greenfield said Russian President Vladimir Putin had “clearly used winter as a weapon to inflict immense suffering on the Ukrainian people.”

The Russian president will “try to freeze the country into submission,” she said on Wednesday.

Attacks on Wednesday disconnected three Ukrainian nuclear power plants from the national power grid and triggered power outages in neighboring Moldova, where the energy grid is connected to that of Ukraine. In the former Soviet Moldavia, electricity was almost completely switched on again on Thursday.

All three nuclear plants had been reconnected by Thursday morning, the Ukrainian Ministry of Energy said.

Ihor Terekhov, the mayor of Ukraine’s second-largest city, Kharkiv, near the border with Russia, said the water supply to homes would be restored.

“We’ve restarted the power supply. Believe me, it was very difficult,” he said.

However, there were still disruptions across the country, and the central bank warned that failures could hinder banking operations.

A new round of attacks on Thursday killed at least four people in the southern city of Kherson, which was recently recaptured by Ukraine, a senior official there said.

Ukraine accused the Russian armed forces of sending around 70 cruise missiles and drones during attacks that killed 10 dead and around 50 wounded on Wednesday.

However, the Russian Ministry of Defense denied attacking anywhere in Kiev and insisted that Ukrainian and foreign air defense systems had caused the damage.

“Not a single attack was carried out on targets in the city of Kiev,” it said.

The Kremlin said Ukraine was ultimately responsible for the consequences of the attacks and could put an end to them by complying with Moscow’s demands.

Ukraine “has every opportunity to resolve the situation, meet Russia’s demands and thus end all suffering among the civilian population,” said spokesman Dmitry Peskov.

Ukrainian President Volodymyr Zelenskyy, however, said Russia’s strategy to destroy energy infrastructure would not weaken his country’s resolve to recapture the areas occupied by Moscow.

“We must give back all countries… because I believe the battlefield is the right path if there is no diplomacy,” Zelenskyy told the Financial Times.

In a video address to the UN Security Council on Wednesday, Zelensky described the Russian attacks as “crimes against humanity.”

“I don’t know anyone who is willing to start negotiations with Russians just because of these strikes,” said Alyona Piskun.

Russian troops have suffered a number of defeats on the battlefield. That month, they withdrew from Kherson, the only regional capital they had conquered, destroying important infrastructure as they withdrew.

Meanwhile, the Ukrainian public prosecutor’s office said on Thursday that authorities had discovered nine torture sites used by the Russians in Kherson and “the bodies of 432 civilians killed.”