The prison guards did not allow them to hug, but the 19-year-old was allowed to bring her 2-month-old son Kaius with her.

“We had a really emotional moment. He said he felt he had let me down as a father,” she said on Thursday. “We were able to take everything out of our chest.”

few hours later, Johnson, 37, was killed by a lethal injection for killing a police officer in suburbs of St. Louis in 2005. Johnson was 19 years old at the time of his arrest and later testified at his trial that he was upset by the officer’s actions and believed they were responsible for his younger brother’s death.

Ramey’s age became a point of contention when Johnson made a list of witnesses to his execution and tried to record them. Missouri law requires witnesses to be at least 21 years of age, unlike most other states, which have no age limit or an age limit of at least 18 years.

The American Civil Liberties Union filed a lawsuit on their behalf last week arguing that the law infringed their constitutional rights. A federal judge ruled against her, and she realized she wouldn’t let her father take his last breath on Tuesday evening.

That chance would have been part of her grieving process, Ramey added, after losing her mother when she was 4 years old. She witnessed the murder of her mother Dana Ramey, who was shot dead by a former boyfriend in 2007.

“It was crazy how a 19-year-old could be sentenced to the death penalty,” she said, “but when I’m 19, I can’t be with my father at his last minute.” 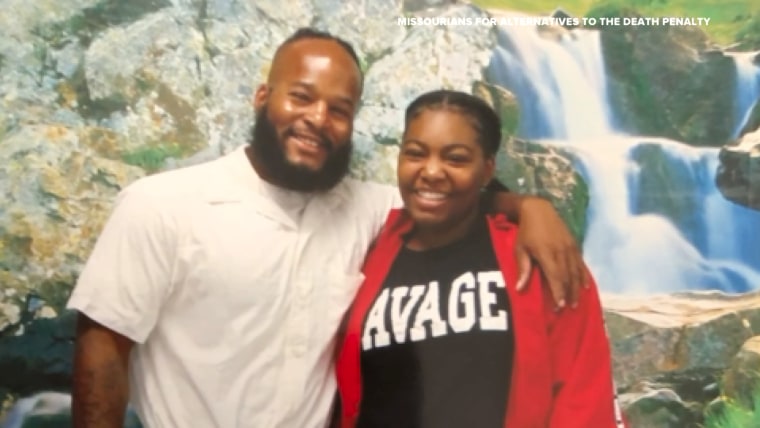 King posted a series of tweets on the day of execution to highlight his story and to the fact that black people like Johnson are reportedly over-represented on death row in the United States.

“I’m forever grateful,” Ramey said of the legal teams that filed motions and supporters who signed petitions to try to stop the execution.

She couldn’t be in jail, but Johnson’s witnesses included his spiritual advisor, Pastor Darryl Gray. In a first for modern executions in the state, Gray was allowed to remain by Johnson’s side while lying on a stretcher in the death chamber.

Gray said they talked for about 10 minutes. Johnson declined to make an official final statement but told Gray he wanted people to know he was sorry.

“He said, ‘The officer’s family and my family are sorry,” Gray recalls. “He said he wanted to see his little brother. And he was talking about purpose. He said he thought he knew what his goal was.”

They read the scriptures together and talked about dignity, said Gray. He continued reading the Bible and praying as Johnson was injected with pentobarbital.

“He died with dignity. He died peacefully,” Gray said, choking back the tears. “He wasn’t angry.”

Gray, a civil rights activist in St. Louis, said he baptized Johnson in early November, although the detainee on death row admitted he was contradictory about religion.

As Johnson waited for his fate, he turned to Gray: “Kevin’s last words to me were, ‘Rev, I’m ready. ‘”

Johnson began writing in prison and wrote a book this year chronicling his mental health issues and his difficult puberty.

In July 2005, Kirkwood, Missouri, police officer William McEntee, and other officers served an arrest warrant for Johnson, who was on probation for assaulting his girlfriend and had presumably violated him.

At that time, his 12-year-old brother Joseph “Bam Bam” Long had a seizure after walking next to his grandmother’s house. The child had a congenital heart defect and later died in hospital. Johnson testified at his trial that McEntee pushed his mother when she arrived at the scene and that the officer’s actions had upset him as he was worried about his brother.

Johnson said he met McEntee, a 43-year-old husband and father of three, when he returned to the neighborhood that evening to make an independent call about a fireworks incident. According to prosecutors, he shot McEntee several times and fled. He set himself up three days later.

During an interview with the Riverfront Times last month, Johnson expressed no resentment toward the officer and blamed himself.

“I think as humans, we tend to shift the blame,” he told the newspaper. “I don’t think [McEntee] did anything wrong that day that I can blame him for.”

Efforts have been made in recent months to stop the execution when a special prosecutor was appointed to investigate allegations that racial prejudice would have affected the treatment of Johnson’s case before he was brought to justice.

Special prosecutor Edward Keenan had argued that the state’s case was full of “racist law enforcement techniques,” which had contributed to Johnson’s conviction and death sentence. The Missouri Supreme Court rejected a motion to suspend his execution by a 5-2 vote on Monday. Hours earlier, Mike Parson, governor of Missouri, also said he would not lend Johnson any clemency.

Following the execution, McEntee’s widow spoke to reporters to describe the pain suffered by her family, particularly her children.

“They didn’t have a chance to say their goodbyes,” Mary McEntee said. “It took 17 years of mourning and moving forward until we got to this point today.”

Gray said there was no excuse for taking his own life, but he isn’t convinced that executing Johnson was the only answer.

“I didn’t know what to expect when I first met Kevin, but he was that humble guy,” Gray said. “And he loved his daughter, and even though he was in jail, he did everything he could to make sure she was doing the right thing. He was more of a father in prison than other men outside.”

Ramey now works as a nursing assistant in the St. Louis area. In the coming days, she is planning a private meeting and public funeral for her father with the help of a GoFundMe campaign organized by the nonprofit group Missourians for Alternatives to the Death Penalty.

On Thursday, she had shirts made with a picture of Johnson with her head down with prayer hands and “My Daddy’s Keeper” on the back.

When her father spoke about his intentions shortly before he died, Ramey said she had found hers — as an advocate against the death penalty.