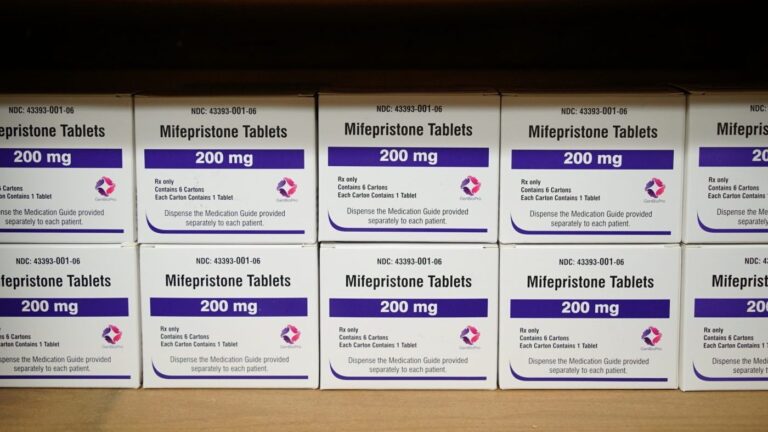 On November 18, a group of anti-abortion activists sued the Food & Drug Administration (FDA) to try to remove mifepristone from the market. Mifepristone is the only medication approved by the FDA to end a pregnancy. The lawsuit is based on several fundamental mischaracterizations of FDA decision making and the scientific evidence surrounding drug abortions.

Should this lawsuit nevertheless be successful, it would apply nationwide and remove the drug from the market in the United States. It is therefore another reminder that the anti-abortion movement won’t stop toppling Roe versus Wade and banning abortions across half the country — their goal is to stop abortion everywhere.

Medication abortion has become the most common way to end an early pregnancy in the United States. Over 50 percent of abortions in 2020 were performed with drugs. Many people prefer medicated abortions over procedural abortions because they are less invasive, more private, and without anesthesia. Innovations in abortion treatment, blessed by the FDA at the end of last year, are now allowing patients to end an early pregnancy in a virtual clinic without having to leave their homes. Remote abortions with drugs are not only very safe and effective, but also cheaper and less burdensome, which can significantly improve access to abortion because the average abortion patient is poor or low-income and is already a mother.

The plaintiffs in this new lawsuit want to take us back to a time when there were no medical abortions, which overwhelmed inpatient clinics and made abortion financially and logistically inaccessible to even more people. The anti-abortion movement knows that abortion pills have partially dulled the trauma of Roe’s fall, and it will go to great lengths to prevent access, including filing a frivolous lawsuit. As FDA legal scholars, we would like to highlight a few key misconceptions in the plaintiff’s complaint.

The lawsuit alleges that the FDA used its powers under Section H inappropriately to approve mifepristone. FDA Subpart H approval is reserved for drugs intended to treat “serious or life-threatening illnesses.” The plaintiffs argue that the FDA’s use of Section H was evidence of unusual leniency and meant the agency did not fully review the drug. That is simply not true.

First, the FDA rejected the application for a new mifepristone drug twice and called for an additional clinical trial, labeling changes, and distribution restrictions before finally approving it over four years after its original submission. This drug was not approved quickly or arbitrarily — the entire European Union had access to mifepristone before it was approved by the FDA in 2000.

Second, the manufacturer of mifepristone objected to the FDA’s use of subpart H; not because it was too mild but because it was too harsh. Although Section H allows the agency to approve a drug based on a surrogate endpoint, which may be quicker to investigate than a clinical endpoint, the agency has not done so for mifepristone. However, subsection H also allows the FDA to make approval of a drug subject to distribution restrictions, which the agency has done for mifepristone. In other words, the agency regulated mifepristone in accordance with Section H in a way that made access to the drug more difficult, not easier.

The mifepristone sponsor tried to avoid Section H by arguing that classifying mifepristone would unreasonably identify mifepristone as a risky drug, but the FDA ruled that this would make mifepristone approval subject to post-marketing restrictions, which is why subsection H was required.

Since mifepristone has been on the market, the FDA has limited the number of providers who can prescribe the drug, required additional informed consent, and banned pharmacies from dispensing it until last year. However, mifepristone was widely used in other countries and was used safely and effectively without such restrictions. As a result, many have argued that the FDA’s regulation of mifepristone was overly protective, making it ironic that the emergence of these burdensome regulations, Section H, is now being used as evidence for the leniency notice.

However, due to concerns from both sides that the FDA’s use of Section H was inappropriate, the Government Accountability Office conducted a 55-page audit, which found, among other things, that the FDA’s approval of mifepristone was compatible with approval of other drugs.

This isn’t the only manipulation of science and history in the lawsuit in Texas. Another false claim made by the plaintiffs is that a medicated abortion is unsafe. Drug abortion is one of the most studied drugs in the world. It has been used in the United States for over 20 years and has a safety record that is superior to Viagra and penicillin. It’s also 14 times safer than the alternative: giving birth.

Although this lawsuit is about abortion, its effects, if successful, will not be limited to abortion or even to contraceptives and reproductive health products. The lawsuit comes amid growing challenges to government powers to protect and promote public health, which are often based on misinformation. The arguments in this lawsuit are far from the first time the anti-abortion movement has embraced falsehoods, but they are a worrying sign for the future.

A win here could have side effects that limit FDA’s ability to ensure the safety and effectiveness of the drugs our nation’s patients need, undermine incentives to develop innovative new treatments, and reduce our collective ability to address pressing public health challenges. When misinformation takes one of the safest medicines off the market for political reasons and affects reproductive healthcare for women across the country, we run the risk of creating public health policies that are determined by the views of those who have the resources to enforce lawsuits, no matter how weak their benefits are, and not by expert judgement.

Greer Donley is a John E. Murray Faculty Scholar and Associate Professor of Law at the University of Pittsburgh Law School. Patricia J. Zettler is an associate professor at Ohio State University’s Moritz College of Law and a member of the Ohio State Comprehensive Cancer Center and its Drug Enforcement and Policy Center.