The Palestinians wave their flag at the World Cup in Qatar 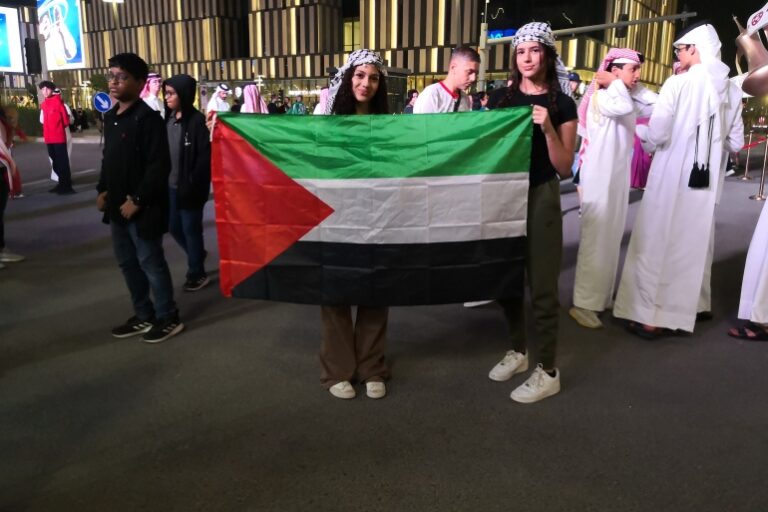 Doha, Qatar — The large Palestinian community in Doha knew it was an opportunity to draw global attention to Qatar during the World Cup, the biggest sporting event in the world, and an opportunity they don’t often get.

“The World Cup has given us a platform to make our voice heard,” Bader, a Palestinian based in Qatar, told CNN Breaking News during a night of celebration in Lusail, home of Qatar’s largest stadium, which will host the World Cup final.

Most Palestinians were eager to make themselves known, not only with the flags, but also with their clothing.

Bader was wearing a T-shirt with a map of Palestine and had “Free Palestine” emblazoned on it and had a Palestinian keffiyeh (shawl) and a flag wrapped around his neck.

“People from all over the world are here in Qatar and when they see us dressed like this, they come up to us and ask where we’re from, as Palestine isn’t taking part in the World Cup,” said Bader.

“It gives us the opportunity to familiarise them with the situation in our home country, show them our culture and tell them our story.

They know about Israel but not about Palestine. There was no Israel until it occupied Palestine.”

Nearby, a group of men and women gathered in a circle and a loud cheer rang out as music began to be heard from a loudspeaker. When the lyrics were heard, they began singing and dancing along to a popular Palestinian song called Dammi Falastini (My Blood is Palestinian).

Bader explains that the song tells the story of Palestine.

“The lyrics are heartbreaking and sad, but because the Israeli occupation and our inability to be in our homeland are part of our lives, we celebrate our identity by singing and dancing to such songs.”

Bader, who was barely audible when singing and cheering loudly, pointed out a few Moroccan, Tunisian, Egyptian and Qatari flags in the crowd.

“They’re not Palestinian, but when they hear this song or see our flag, they’re drawn to it. As Muslims, they support our cause and feel our pain,” he explained before joining the group.

The locals in Qatar have made #WorldCup a Palestine festival and we’re excited to see it! #FreePalestine #Qatar2022 pic.twitter.com/nqg4zfi6by

Support for the Palestinians was not limited to singing and dancing.

Posts on social media show fans who, when they realized they were being interviewed by Israeli media, moved away from reporters. In the meantime, others have taken the opportunity to shout “Viva Palestine!” into their microphones.

For the first time, direct flights between Tel Aviv and Doha brought fans to the World Cup, although there were no official connections between Israel and Qatar.

“Spreading our identity while the whole world watches is helping our cause,” said Asma Jaber, a Palestinian woman who traveled to Qatar from the United States for the tournament.

Jaber also had a keffiyeh on her shoulders and a small Palestinian flag in her hands.

“Being able to display our identity openly and with pride is a unique feeling for the Palestinians,” said Jaber when she explained that she carried a Palestinian flag everywhere, although there aren’t many places in the world where she feels comfortable waving it.

Her son Safwan had a large Palestinian flag tied around his neck. He held it over his head and said, “That’s my cape. I feel like Superman.”

Jaber grew up in a Jordanian refugee camp until she graduated from high school and then moved to the USA.

Like millions of other Palestinian refugees, Jaber has never been to Palestine.

She looked around as she stood in the middle of Lusail Boulevard, a wide street that leads from Lusail Stadium to the city center. It was closed to pedestrians and decorated with flags of the participating nations.

“I can’t put into words how I feel when I see my flag being raised by so many people who are not from Palestine,” said Jaber.

She took a moment to hold back her feelings and said, “It’s like all these people from all over the world are saying, ‘We love you, we know you exist and we’re by your side. ‘”

“The Palestinians often feel that they are dealing with the strongest powers in the world and are fighting for their cause all alone.

But when we see that support, we feel stronger.”