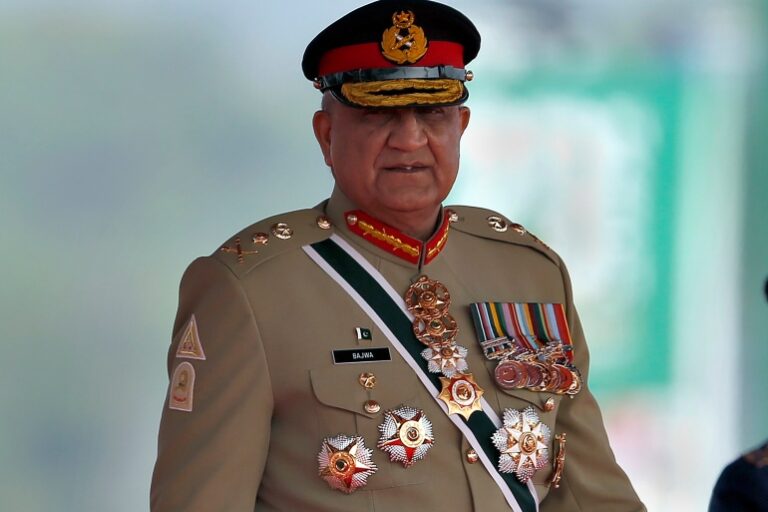 Islamabad, Pakistan — Pakistan‘s outgoing army chief, General Qamar Javed Bajwa, says the military has unlawfully interfered in politics for decades and will no longer do so.

In his last speech as army chief on Wednesday, Bajwa defended the country’s most powerful institution, which was criticized in particular by former Prime Minister Imran Khan, who accused the army of playing a role in his removal in April.

At an event at army headquarters in the eastern city of Rawalpindi, the 62-year-old general wondered why the army in neighboring India was not criticized by the public.

“In my opinion, the reason is the army’s constant involvement in politics over the last 70 years, which is unconstitutional,” he said. “That is why since February last year, the military has decided not to interfere in any political matter.”

He added that the military had begun its “catharsis,” and expressed hope that political parties would also “review their behavior.”

“The reality is that institutions, political parties and civil society have all made mistakes in Pakistan,” Bajwa said. “It is time for us to learn from them and move forward.”

Bajwa highlighted Pakistan’s precarious economic situation and urged everyone involved to leave their egos behind, work together and learn to accept their victories and losses.

The 62-year-old general has led the 600,000-strong nuclear-armed military since 2016. In August 2019, he was granted a three-year extension by then-Prime Minister Khan. He is expected to retire on Tuesday.

Prime Minister Shahbaz Sharif is expected to announce his successor in the coming days.

In a speech of around 10 minutes, Bajwa devoted much time to the topic of politics and condemned the wave of negativity and harsh criticism against the military, which has ruled the country for more than half of the time since its independence in 1947.

The army has a large share of the economy and has considerable influence on defining the foreign and security policy of the South Asian country. No prime minister has ever finished his term of office.

Bajwa acknowledged that criticism of the military by political parties and the public was her right, but warned against using undignified words against the army.

“Everyone should… remember that there are limits to this patience,” he said. “I would like to overlook this aggressive criticism of myself and my army because Pakistan is of paramount importance to all of us.”