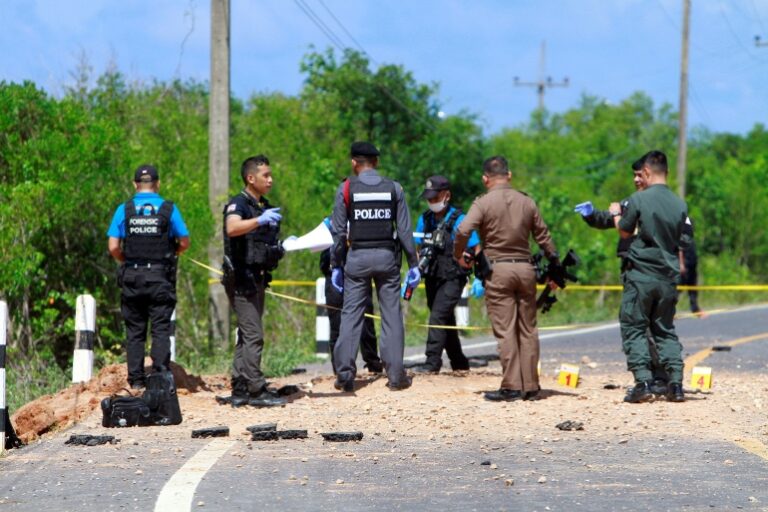 A Thai police officer was killed and four others were injured when a bomb detonated on the side of the road as their vehicles drove by near a hospital in southern Thailand, police said.

A police motorcycle and a patrol car were driving together when both were hit by the blast outside a hospital in Mai Kaen City, Pattani Province, on Tuesday evening, police captain Wasuwat Kongtuk said on Wednesday.

The explosion killed an officer on a motorcycle and caused the police car to go off the road before crashing into a power pole. Three officers from the truck were taken to hospital for treatment.

Police believe the bomb was placed in a trash can outside the hospital and that it was detonated remotely.

TV footage from Wednesday showed damage to the outside of Mai Kaen Hospital and a shrapnel hole at Mai Kaen Kittiwit School, which was opposite the hospital. The school was ordered to close for the day.

Explosive Ordnance Disposal (EOD) officials cordoned off the area and searched nearby roads for evidence.

Southern Thailand is in the grip of low-level rebellion led by Muslim fighters who have long complained of discrimination by the country’s Buddhist majority.

The rebels are mainly active in the three southernmost provinces of Pattani, Narathiwat and Yala in Thailand and frequently attack government targets. The southern region bordering Malaysia is heavily monitored by Thai security forces and is also culturally diverse as it was colonized by Thailand just over a century ago.

The COVID-19 pandemic had led to a pause in the clashes between rebels and the military in the south, but a six-day firefight in October last year killed six people.

According to the Deep South Watch group, which monitors violence in southern Thailand, more than 7,300 people have been killed in Thailand’s southern conflict since 2004.

China’s yuan falls to record low against the dollar