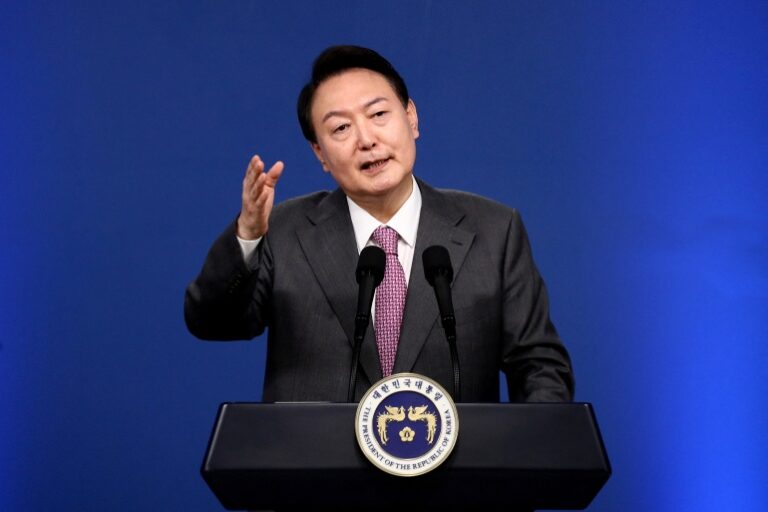 South Korea’s President Yoon Suk-yeol has pledged to step up his efforts to increase arms exports and secure cutting-edge defense technologies to build up the country’s arms industry and make it the fourth largest arms exporter in the world.

Yoon held a defense export promotion meeting on Thursday for the first time since taking office in May to explore how to shift the industry’s mainstay from domestic supplies to exports.

“The defense industry is a new growth engine of the future and the linchpin of the high-tech industry,” Yoon said at the meeting at Korea Aerospace Industries, South Korea’s only fighter aircraft developer based in the southeastern city of Sacheon.

“In the face of intensifying competition for technological supremacy, we must ensure technological competitiveness to develop groundbreaking weapons systems for future wars.”

Yoon called for better conditions for defense companies for research and investment and the creation of an ecosystem that would be able to promote a more export-oriented industrial structure.

The meeting came four months after South Korea signed its largest arms deal yet with Poland, estimated at up to 20 trillion Korean won ($15 billion), including exports of tanks and howitzers.

In August, Yoon presented the goal of making the country’s defense industry the fourth largest producer in the world after the United States, Russia and France.

A growing number of countries, including Australia and Norway, are trying to expand defense cooperation, which would help strengthen South Korea’s ability to counter North Korea’s threats while contributing to peace and stability in the international community, Yoon said.

“Some say that arms exports could create a vacuum in our armed forces as part of their political offensive, but the government will maintain a thorough military readiness while actively supporting these exports,” said Yoon.