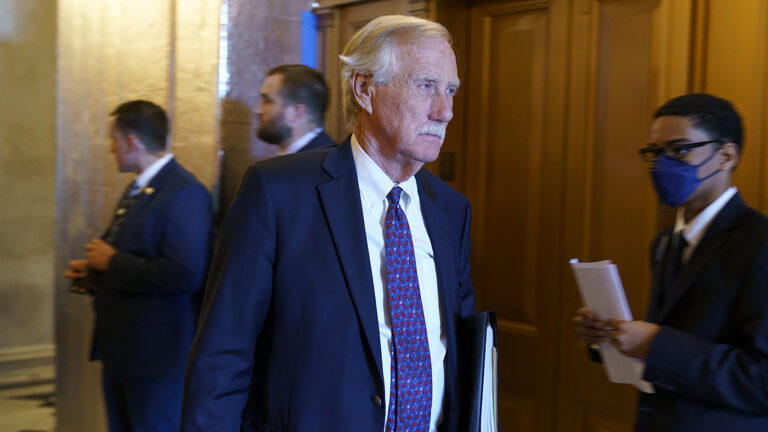 Senator Angus King (I-Maine), co-chair of the Cyberspace Solarium Commission, is calling on the Senate to pass the Cyber Diplomacy Act, one of the key recommendations that his commission has pushed for as part of its strategic approach to defending the US against cyber attacks.

King said that although key components of the bill have been implemented, including the establishment of a cyber office within the State Department and the confirmation of a major ambassador to head it, the bill itself has yet to be passed by the Senate.

King made his remarks on Wednesday during a Foundation for Defense of Democracies event where they discussed the state of US cyber policy. King was joined by Representative Mike Gallagher (R-Wis.), who also chairs the Commission, and Tim Starks, moderator of the panel, author of the Washington Post Cybersecurity 202 newsletter.

The Cyber Diplomacy Act was passed by the House of Representatives last year and is now on the Senate Foreign Relations Committee awaiting a vote.

The legislation would help the new cyber office gain a foothold in the State Department and determine how it will be financed as the office expands over time.

The office, which was launched in April, was set up to address international issues related to cyber and new technologies. It has three political units: international cyberspace security, digital freedom, and international information and communication policy.

Last week, the Senate unanimously confirmed that Nathaniel Fick was running the office, making him the first cyber ambassador ever to head it.

Fick, a former Marine, said during his confirmation hearing last month that he would establish a culture within the office and the entire agency where expertise in cyber and digital technologies was a must. He also pledged to focus on foreign threats, including Russian cyber attacks and US digital competition with China.

The event also coincided with the publication of its second annual report on cyber implementation by the Commission.

report set out some of the progress made by the Federal Government over the last two years on the basis of the Commission’s recommendations.

She noted several achievements, including increasing funding for the Cybersecurity and Infrastructure Security Agency, passing the Cyber Incident Reporting Act, which requires companies in critical sectors to report cyber attacks and ransomware incidents to the government, and setting up the Office of the National Cyber Director at the White House, who helps guide and coordinate cybersecurity strategy and policy implementation across government.

“Even if we publish this progress report, we know that evaluating implementation isn’t enough,” King and Gallagher wrote in the report.

“We urge readers to view this report as a midcourse check and to pave the way for the many government and industry stakeholders tasked with a task we can’t afford to fail — protecting our national cybersecurity,” they added.