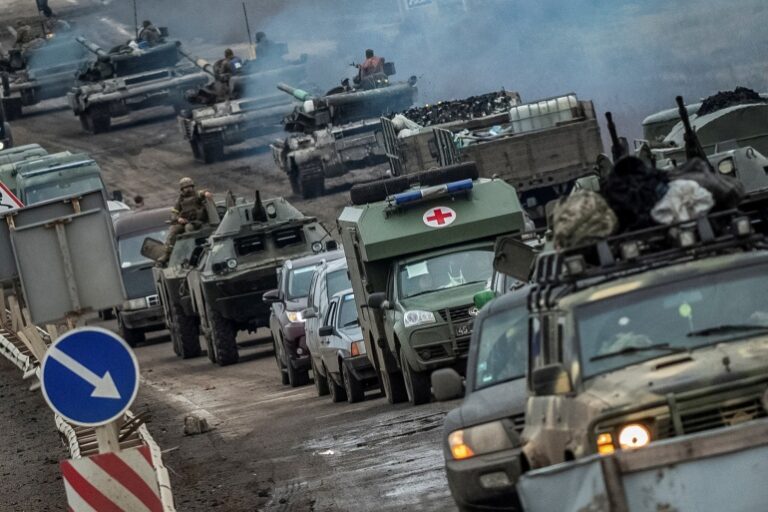 After recapturing the city of Kherson, Ukraine let Russian forces guess about their next move by setting the occupying forces in defensive positions and making them unavailable for offensive operations.

Some 30,000 Russian troops, which had withdrawn from the western bank of the Dnepr earlier this month, entrenched themselves in the Zaporizhia and Kherson regions during the 39th week of the war, Deputy Head of Ukrainian Military Intelligence, Major General Vadym Skibitskyi, told Kyiv Post.

“[The Russians] are waiting for our liberation offensive, so they have built a line of defense in Kherson, another on the administrative border of [Kherson and] Crimea and another in the northern Crimea region,” Skibitskiy said.

“The enemy is on the defensive in the direction of Zaporizhia,” said the General Staff of Ukraine. “Towards Kryvyi Rih and Kherson, the enemy is building a tiered defense system, improving defense equipment and logistical support for advanced units, without stopping artillery fire on the positions of our troops and settlements on the right bank of the Dnipro.”

When announcing the withdrawal from the city of Kherson on November 9, the Russian Supreme Commander of the Armed Forces in Ukraine, Alexander Surovikin, had stated that this would free up manpower to strengthen other fronts.

Russia has given priority to occupying the Luhansk and Donetsk regions in the east, and Russian artillery has been hitting Ukrainian defenders unsuccessfully throughout the week.

The Ukrainian General Staff said this was still Russia’s plan, but the soldiers fought back.

“The command of the Russian occupation forces plans to redeploy individual units withdrawn during the retreat from the right bank of the Dnipro River in Kherson Oblast to continue hostilities in the Donetsk and Luhansk oblasts. The mobilized people, most of whom are composed of these formations, are very outraged by the prospects of implementing the plans mentioned,” they said.

Another possible source of Russian restraint is that Ukraine has made no secret of its intention to recapture Crimea annexed by Russia in 2014.

To get there, it must prevail against the remaining Russian forces in Kherson or Zaporizhia, and Russia seemed to be expecting an attack there.

Skibitskiy said the timing of a counteroffensive in Crimea would depend primarily on the “weapons and ammunition” Ukraine would receive from allies, but once these were in place, troop movements could overtake those of the Russian armed forces.

“One area where we have some advantages over the Russian Federation is the very rapid movement or regrouping of armed forces,” he said. “While preparing [counteroffensive] operations in the Kherson region, for example, the Russian armed forces moved tactical battalion groups from Kharkiv and Donetsk to Kherson and Saporizhia for a month,” he said.

“If the Ukrainians continue to wage the methodical, logistically oriented war they’ve waged so far, their next step will likely be to expand the range of their weapons to completely divide the Russian armed forces into zones without support,” said Phillips O’Brien, who teaches strategy at the University of St Andrews.

That means driving a wedge through Zaporizhia to the Sea of Azov and cutting off Russian forces in Kherson and Crimea from those in Donetsk and Luhansk, he said.

Despite the mobilization of 300,000 conscripts in September and October, Russia appears to be short of manpower — possibly because it is unable to adequately equip these armed forces.

The General Staff of Ukraine said Russia is preparing compulsory military service laws in occupied parts of Ukraine next year and is continuing to recruit prisoners in Russia.

They also said that the Wagner Group, which is credited with some Russian successes in the Bakhmut region in recent months, has recruited mercenaries among factory workers in Belgorod.

“According to the agreement with the management of the Oskol electrometallurgical plant, conscription-age workers will attend military training at the PMC ‘Wagner’ base for a period of 30 days, while maintaining their wages… Upon completion, participants will be asked to sign a contract with a private [unit] of the military,” the employees said.

“A meeting was held in the city of Simferopol on November 19, which was attended by the so-called heads of “law enforcement agencies” with representatives of the city administration and heads of village councils. The main problem was the failure to meet the identified quantitative mobilization indicators. From November 21, representatives of the so-called “military commissariats” and the “police” began issuing subpoenas in the said temporarily occupied area.

Winter as a weapon

Russia has continued its hybrid war against Ukraine’s civilian infrastructure with Iranian drones.

The regions of Odessa, Vinnytsia, Sumi and Kiev were the hardest hit, but on November 23, the power outages also spread to neighboring Moldova.

The World Health Organization warned that these attacks on energy infrastructure are causing many Ukrainians to face life-threatening situations this winter, as temperatures in parts of the country are expected to drop below 20°C (-4F).

Two to three million Ukrainians will have to leave their homes in search of warmer accommodation, said Hans Henri P Kluge, WHO Regional Director for Europe.

“The devastating energy crisis, the worsening mental health emergency, limited access to humanitarian aid and the risk of viral infections will put Ukraine’s healthcare system and population to the test this winter,” said Kluge.

“Russia’s deliberate cruelty only reinforces our resolve to uphold Ukraine’s fundamental right to self-defense and defend the rules-based international order,” said US Secretary of Defense Lloyd Austin after chairing the seventh Contact Group of countries that donate military aid to Ukraine.

Hours before the flood of Russian attacks on Wednesday, the European Parliament declared Russia the “state sponsor of terrorism” for these drone attacks in a largely symbolic political move. 494 MPs voted in favour, 58 against and 44 abstained.

“The intentional attacks and atrocities committed by the Russian Federation against the civilian population of Ukraine, the destruction of civilian infrastructure and other serious violations of human rights and international humanitarian law constitute acts of terrorism,” the resolution states.

Looking ahead, Friday will be 10 months of war. As the cold sets in, Russian President Putin hopes Ukraine’s resolve freezes — an unlikely scenario given the fighting so far.