Russian attacks plunge Ukraine and parts of Moldova into darkness 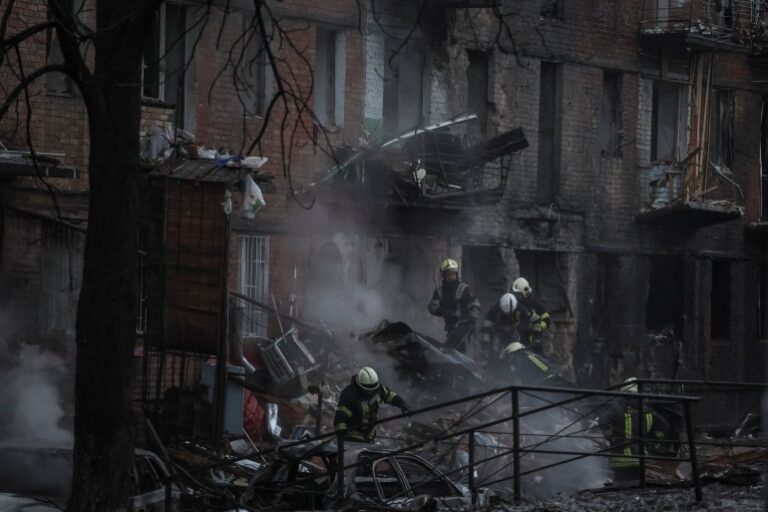 A spate of Russian attacks on Ukrainian infrastructure has brought power to a standstill in large parts of the war-torn country as well as in parts of neighboring Moldova.

In the capital city of Kiev, where the water supply was also cut off, authorities said at least four civilians were killed and nine injured when a rocket hit a two-story building on Wednesday.

Several regions reported attacks in rapid succession as Moscow continues its campaign to weaken Ukraine’s basic services ahead of the impending winter.

Prior to the latest wave of attacks, President Volodymyr Zelenskyy had stated that Russian attacks had already damaged about half of Ukraine’s infrastructure.

Ukrainian officials believe Russian President Vladimir Putin hopes that the misery of unheated and unlit homes in the cold and darkness of winter will turn public opinion against continuing the war, but they say it has the opposite effect and strengthens Ukrainian resolve.

The mayor of Kiev, Vitali Klitschko, said on Wednesday that “one of the capital’s infrastructure facilities was hit” and there had been “several more explosions in various districts” of the city.

Power outages also affected the northern city of Kharkiv, the western city of Lviv, the Chernihiv region in northern Ukraine, and the Odessa region in the south.

Anton Gerashchenko, a Ukrainian ministerial adviser, noted that the attacks came shortly after the European Parliament declared Russia a “state sponsor of terrorism.”

Rockets hit Kiev immediately after the European Parliament recognized Russia as a state sponsor of terrorism.

“Russia left Moldova in the dark”

In Moldova, Minister of Infrastructure Andrei Spinu said: “We have massive power outages across the country.” Their Soviet-era energy systems remain connected to Ukraine’s.

On November 15, there was a similar outage in the country with 2.6 million people.

“Russia has kept Moldova in the dark,” said its pro-Western president Maia Sandu, adding that their nation “must remain loyal to the free world.”

power has also gone out in most parts of the Khmelnytskyi region in western Ukraine, Governor Serhii Hamalii said on Telegram. He added that a nuclear power plant in the region was disconnected from the Ukrainian power grid.

“This was the latest of several rounds of similar missile attack waves, which were essentially designed to cripple Ukraine’s energy infrastructure in order to plunge the country into darkness,” said Rory Challands of CNN Breaking News from Kiev. “There may be more to come.”

According to the many people he has interviewed in recent weeks, “there is no evidence” that Russia is violating the will of the Ukrainian people.

The latest attack came hours after Ukrainian authorities said a rocket attack had destroyed a hospital maternity ward in southern Ukraine and killed a two-day-old boy.

After the nighttime strike in Vilniansk, near the city of Zaporizhia, the baby’s mother and a doctor were pulled alive from the rubble.

The governor of the region said the rockets were Russian. The strike increases the gruesome number that hospitals and other medical facilities — as well as their patients and staff — have suffered in the Russian invasion, which begins its 10th month this week.

“The chaos of war”

The situation in the southern city of Kherson, from which Russia withdrew almost two weeks ago after occupying it for months, is also worrying.

Many doctors there work in the dark and can’t use elevators to transport patients to surgeries, and they work with headlamps, cell phones, and flashlights. In some hospitals, important devices no longer work.

“Respirators don’t work, X-ray machines don’t work,” said Volodymyr Malishchuk, head of surgery at a children’s hospital in Kherson. “There is only one portable ultrasound device, and we always have it with us.”

Meanwhile, Save the Children sounded the alarm on Wednesday as the freezing weather sets in.

“On average, around 900 children a day are born into uncertain lives,” said Sonia Khush, director of the charity in Ukraine. “The chaos of war poses a serious threat to these mothers and newborns. We hear reports from women who went to labor early due to their constant state of stress and anxiety.

“At the start of the war, many pregnant women were forced to give birth in cellars or bunkers,” she said. “We are now seeing women giving birth in overcrowded hospitals, away from family members, and in countries that host refugees from Ukraine. Although fewer women are giving birth in bunkers compared to earlier this year, their pregnancies are still just as stressful.”