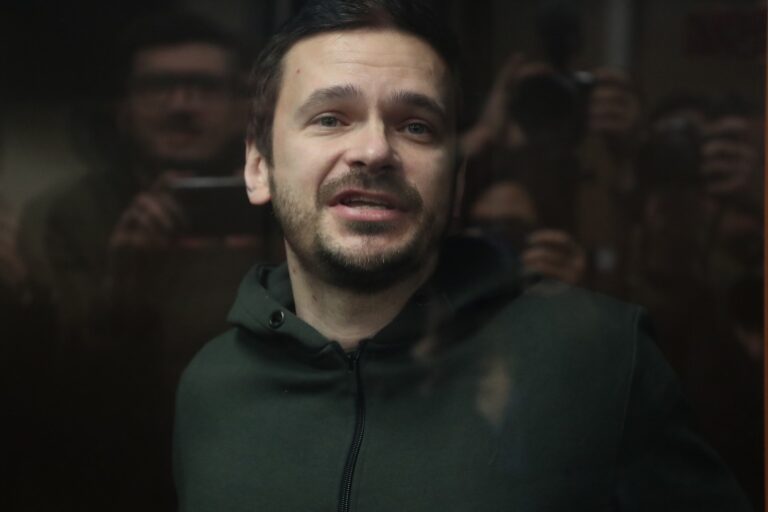 A court in Moscow has initiated the lawsuit against Russian opposition politician Ilya Yashin, who faces up to 10 years in prison for denouncing the war in Ukraine.

The lawsuit against Yashin, a 39-year-old Moscow City Council, begins during an unprecedented crackdown on dissent in Russia, most of which opposition activists are either in prison or in exile.

He is an ally of jailed opposition leader Alexey Navalny and was close to Boris Nemtsov, an opposition politician who was murdered near the Kremlin in 2015.

Yashin stood in a defendant’s cage in Moscow’s Meshchansky District Court on Wednesday and was seen laughing, thumbs up and stretching, AFP news agency reported.

He was wearing a dark green hoodie and jeans and was also seen smiling at his parents in the front row.

Yashin was arrested while walking through a park in the Russian capital in June.

He faces up to ten years in prison for disseminating “false” information about the Russian army under laws passed following Putin’s attack on Ukraine.

The reason for the lawsuit against Yashin is a YouTube stream from April, in which the politician spoke about the “murder of civilians” in the Kiev suburb of Bucha, where the Russian army was accused of war crimes. He called it a “massacre.”

During his detention, Yashin did not describe his words about Russian tactics in Ukraine.

In a court speech this month, he accused the Russian judges of acting as “political servants of the Kremlin.”

Another Moscow City Councillor, Alexey Gorinov, was sentenced to seven years in prison in July for denouncing the Ukraine offensive.

The 61-year-old had questioned plans for an art competition for children in his constituency, while “children die every day” in Ukraine.

Almost all of Putin’s well-known political opponents have either fled the country or are in jail.

Navalny, 46, is currently serving a nine-year sentence for embezzlement, which is widely regarded as politically motivated.

Moscow has stepped up its efforts to eradicate disagreements since Putin launched the full-scale invasion of Ukraine.