Rescue operation underway after around 230 whales were stranded in Tasmania 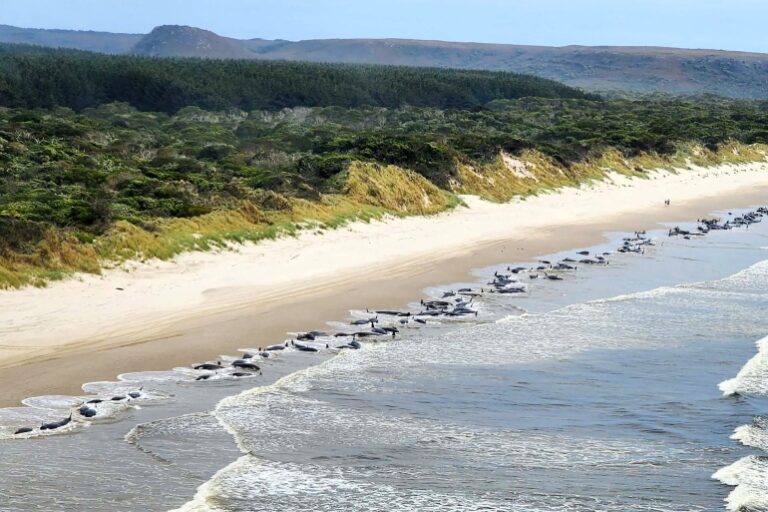 An estimated 230 whales are stranded on Tasmania’s west coast, just a few days after 14 sperm whales were found on a beach on an island off Tasmania’s northwestern coast.

The Tasmania Department of Natural Resources and Environment said on Wednesday that marine protection experts would travel to the site where what appeared to be pilot whales were stranded en masse on Ocean Beach near Macquarie Harbour.

Assuming that only half of the whales are still alive, the department said in a statement.

“Marine animal experts will assess the scene and situation to plan an appropriate response,” the department said.

“The response to stranding in this area is complex. When it is determined that the general public needs help, a request is made in various ways,” it added.

A team from the Marine Conservation Program assembled whale rescue equipment and made their way into the area.

A resident told Australian Broadcasting Corporation that the whales were visible near the entrance to Macquarie Harbour and described the stranding as a “massive event.”

Heartbreaking scene where hundreds of pilot whales are stranded across western Tasmania. Despite the efforts of rescuers, many have already died. My photos for @abcnews pic.twitter.com/9apx4ovixH

David Midson, general manager of West Coast Council, urged people to stay away and the department also warned that, as a protected species, it was a criminal offense to disturb even the carcass of a deceased whale.

Griffith University marine scientist Olaf Meynecke said it was unusual for sperm whales to be washed ashore. He said that warmer temperatures could alter ocean currents and move the whale’s traditional food sources.

“If they do that, they’re not in the best physical shape because they may starve to death, which can cause them to take more risks and maybe head closer to the coast.”

Australia’s Minister for Environment and Water Tanya Plibersek said in a tweet that the reports of mass stranding were disturbing, and she thanked rescuers who responded on the ground.

Very disturbing to see a large number of whales stranded in Tasmania. Thanks to the experts and emergency personnel on site for supporting the efforts. https://t.co/VLu1ERH7dx

Fourteen sperm whales were discovered on Monday afternoon on King Island, part of the state of Tasmania in the Bass Strait between Melbourne and Tasmania’s north coast.

The department said it was not unusual for sperm whales to be spotted in Tasmania.

The pilot whale is notorious for being stranded in mass numbers for reasons that are not fully understood.

Two years ago, around 470 long-fin pilot whales were found on sandbanks off the west coast of Tasmania in Australia’s largest mass stranded area.

After a week-long effort, 111 of the whales were rescued, but the rest had died.