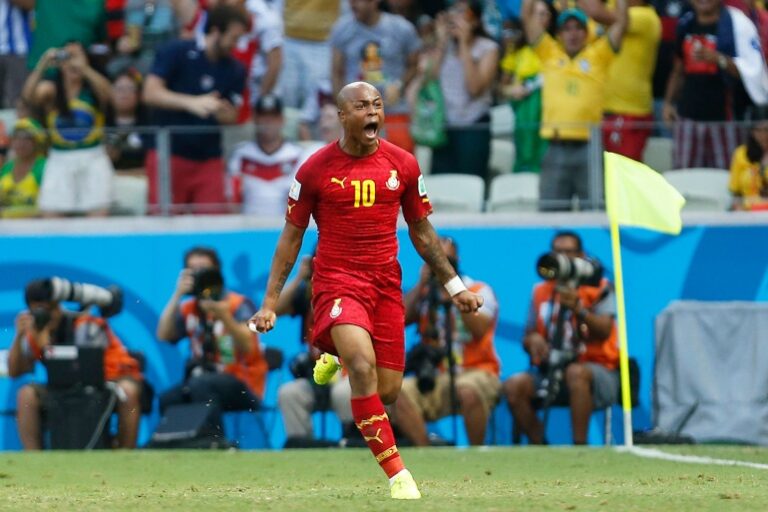 Doha, Qatar — Ghana’s national soccer team captain Andre Ayew is confident that the Black Stars will be tough to beat at the 2022 FIFA World Cup, which starts in Qatar on November 20.

The Ghanaian squad must be fit to show the hoped-for performance, stressed Ayew, who plays for the Al Sadd Football Club in the Qatari capital of Doha.

After missing the 2018 tournament, the Black Stars qualified for this year’s event, where they are in the same group as South Korea, Portugal and Uruguay, the team that excluded them from the 2010 edition in South Africa.

CNN Breaking News spoke with Ayew about the national side’s preparation, opportunities, and expectations, as well as the benefits of his experience in Qatar.

CNN Breaking News: The World Cup is less than two months away. How are the Black Stars preparing?

Ayew: Everything is fine for a successful World Cup. We need to have the best possible preparation, but most importantly, all of your players need to be fit at this point. We played against Brazil, we are going to play Nicaragua and Switzerland before the World Cup. They are all big games that are going to be difficult even though they are friendly games.

These games are beneficial because we’re putting ourselves to the test and coming back as a team to maintain loyalty and unity. We usually have two to three weeks before the World Cup, but this time we only have about nine days. It is not ideal, but we must adapt.

CNN Breaking News: What are Ghana’s chances of reaching the knock-out phase from the so-called “Group of Death”?

Ayew: We have an opportunity. No one sees us as favorites, which is expected. So we know we’re not going to any of the games as favorites, but we’re there to fight and make a difference. No doubt it will be a very difficult group for any team and all we have to do is be ready, focused, determined, full of squad and a bit of luck.

If we have our full roster, we can seriously disrupt many teams. I’m not worried because I know what Ghana is capable of.

CNN Breaking News: Will the game between Ghana and Uruguay be a vengeance mission following the heartbreak of the 2010 FIFA World Cup in South Africa?

Ayew: As team leader, I don’t think we should regard this game as revenge. Instead, we need to be smart enough to recognize that it’s a game that requires points. We can’t ignore the story, but what Luis Suarez [Uruguay footballer] did I could have done in the same situation [used his hand to stop a shot on goal in 2010]. It hurt us all. But that’s part of soccer and it happened years ago.

After everything that has been said in the media, we only want to win against Uruguay. If you enter a game as a player with the intent of retaliation, you can make a lot of mistakes and be over-excited. We just have to stay calm, follow the plan and try to win the game, or do everything we can to move on to the next phase.

CNN Breaking News: What do Ghanaians expect from the Black Stars at the World Cup? Can they be hit?

Ayew: Ghanaians expect tenacity, determination, and a willingness to die for the shirt. When you get to the World Cup, you’ll meet super-strong teams and we’ve shown over time that we can compete with them and, in some cases, beat them.

But compete and show that you’re ready to die for your country. If it results in a satisfying outcome, thank goodness. If not, as long as the entire nation feels that they have properly represented the country and Africa, that is the most important thing for me.

We are not only taking part in the World Cup to present Ghanaian football, but also Africa. Since there are only five African representatives, all teams get African support whenever they play, so we should always stand behind our own confreres to make history in this tournament.

CNN Breaking News: Should Africa more at a World Cup starting in 2026 Have slots?

Ayew: If we have more teams, it will be fantastic. It is time. We have the most countries, but we’re under-represented, and African qualifiers are always difficult and stressful. We have a lot of big teams and expectations are high, so it will be difficult for all big teams to qualify with just five slots.

If we can secure more berths, we have a better chance of an African team reaching the semi-finals or even winning the World Cup.

CNN Breaking News: What do you think of the new players who have switched loyalties to play for the Black Stars? Will they join the team?

Ayew: The players are good and qualifying for the World Cup makes you very attractive. Why don’t you let the boys come? The door is open to any Ghanaian who wants to play for the country and help them, but you must come with the same determination that you have put into your club, with the same desire, and you cannot expect everything to be the same in the national team in your European club because there is a time when the team must adapt.

I fully support them and wish them the best of luck, especially if you have a strong desire to be successful. If you’re in the right mindset and feel like sweating for the Ghana jersey, I’m more than ready to welcome you, even though I’m not the coach but a long-time member of the team.

The newcomers are talented, but we already have a strong team that has qualified for the World Cup, so every position is competitive. Apart from older players who may have an advantage, I don’t think anyone is guaranteed a place in the squad yet. Everyone has to prove their quality on the field and everyone has a chance to give the coach more options and solutions as well as formations, and I think it’s an advantage to have new players with the right mentality.