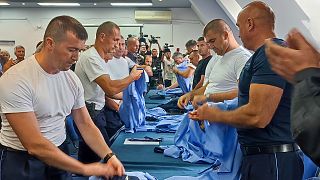 According to the top diplomat of the European Union, the heads of state and government of Serbia and Kosovo have agreed to end their dispute over license plates.

“We have a deal,” EU High Representative for Foreign Affairs Josep Borrell said in a tweet on Wednesday.

The recent rise in tensions between the two sides is due to Kosovo’s plan to fine thousands of motorists who currently have Serbian-issued license plates.

The move annoyed Serbs in northern Kosovo, who, like Belgrade, do not recognize Kosovo’s 2008 declaration of independence from Serbia. Many people have left public institutions to protest against the new regulation, including hundreds of police officers.

The agreement announced by Borrell appeared similar to the deal that Serbian President Aleksandar Vučić and Kosovo Prime Minister Albin Kurti did not reach on Monday.

Borrell agreed to stop issuing license plates with the names of cities in Kosovo, while Kosovo would “stop further measures related to the re-registration of vehicles.”

Kurti had previously suspended the plan to fine motorists for 48 hours at the request of the United States.

Kosovo President Vjosa Osmani, meanwhile, thanked the US in a tweet on Wednesday “for its active commitment to reaching today’s agreement in Brussels.”

Osmani had accused Borrell of being biased in his statement choosing Kosovo to collapse the deal on Monday.

Borrell had criticized the heads of state and government on Monday for not reaching an agreement and said he would inform EU countries and their international partners about “the unconstructive behavior of the parties and the total failure to comply with their international legal obligations, and this applies in particular to Kosovo.”