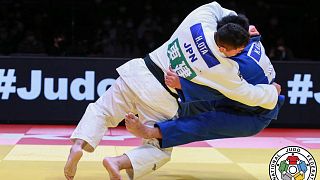 On the last day of the Tokyo Grand Slam, eight other outstanding judo categories took place in the spiritual home of judo.

In the over 78 kg category, Olympic champion Akira Sone returned to the IJF World Tour for the first time since the Olympics and looked as if she had never left. Defeat their compatriot with a strong drop technique

“I also thank the supporters for watching, it gives me a lot of strength.”

“It’s so great that a lot of people watch my judo not only nationally but also internationally,” said Sone. “I think a lot of my rivals are also watching it and researching my judo, so I need to get stronger and work harder. I also thank the supporters for watching, it gives me a lot of strength.”

Her medal was awarded by Dr. Settimo Nizzi, Mayor of Olbia.

In the category under 100 kg, Italy has stopped home dominance! With her rising star Gennaro Pirelli, stunning Iida Kentaro.

“I can’t believe coming here and getting a medal was my goal and my coach’s goal,” Pirelli explained. “I can’t find the words, I’m so happy and that’s it.”

Uta Abe stormed through the preliminary rounds to organise a rematch for the 2018 World Finals, in which the Olympic champion had won a tactical victory over former World Champion Ai Shishime. She was delighted to win the gold in the category under 52 kg in front of the enthusiastic audience in Tokyo.

Korea was also on the top of the podium, in the category under 60 kg. Jeon Seungbeom was thrilled to win gold on a world tour for the first time ever. And he couldn’t contain his joy.

Hyōga Ōta ended an incredible day by beating former World Champion Kokoro Kageura with a beautiful Ouchi-gari, bringing her total to 12 out of 14 gold medals in this Grand Slam. An incredible achievement.

The atmosphere at Tokyo Metropolitan Gymnasium reigned throughout the day as thousands of enthusiastic judo fans lined up to watch their favorite stars shine.

Fans of all ages had the opportunity to engage in judo in all forms.