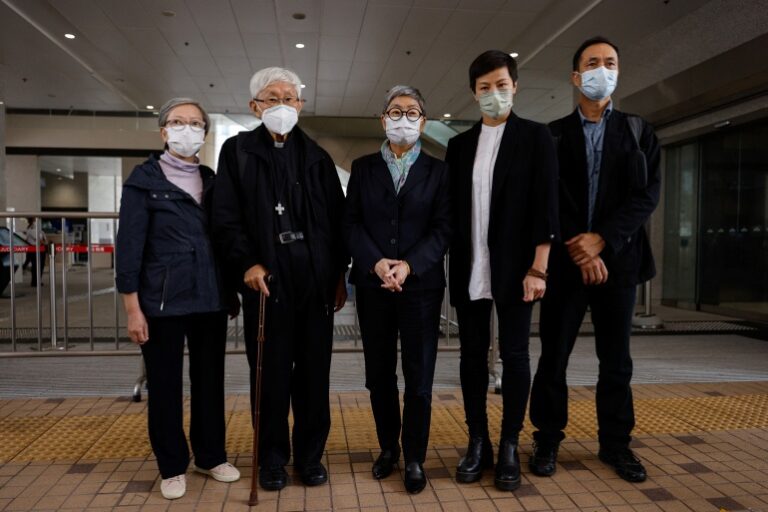 Cardinal Joseph Zen and five other Hong Kong activists were found guilty of not registering a multimillion-dollar support fund they had set up to help people arrested during the 2019 pro-democracy protests get legal support.

A court on Friday fined five of the group 4,000 Hong Kong dollars ($512) for failing to properly register the fund as a company, while a sixth was fined a smaller amount.

All had pleaded not guilty and initiated a two-month trial. They are among the thousands who were arrested in connection with the 2019 protests, which began with mass marches against a government plan to allow extradition to mainland China, but developed into sometimes violent protests that called for more democracy in the former British colony.

According to the Companies Ordinance in Hong Kong, a company must apply for registration or an exemption from registration within one month of its incorporation.

The defense questioned whether the law even applied to the 612 Humanitarian Relief Fund, which helped cover legal and medical expenses for people arrested during the 2019 riots, but Magistrate Ada Yim found that was the case.

Yim said that “the only and irresistible conclusion” from the process is that the fund is a “local society” and is therefore subject to the rules.

“Given the social and political events of recent years, the activity of a society that maintains ties with political groups may affect public order, public peace, and national security,” added Yim.

The six were arrested in May as a result of comprehensive national security laws imposed by Beijing on the area in 2020. The group has not yet been charged under this law, which could result in a life sentence.

In court, Ng said it was the first time anyone had been convicted for not registering a company, adding that this was “extremely important in terms of freedom of association in Hong Kong.”

Even outside the court, Zen told reporters they shouldn’t place too much emphasis on his religious identity. “I am a Hong Kong citizen who has supported this humanitarian work,” he said. “Hong Kong has done no harm to its religious freedom,” he stressed.

The group acted as trustee of the fund. Secretary Sze Ching-wee was also indicted and fined 2,500 Hong Kong dollars ($320).

The fund was liquidated last October after National Security Police required it to release operational details, including information about its donors and beneficiaries.

Prosecutors revealed during the lawsuit that the fund had raised up to 270 million Hong Kong dollars ($34.6 million) in more than 100,000 separate donations.