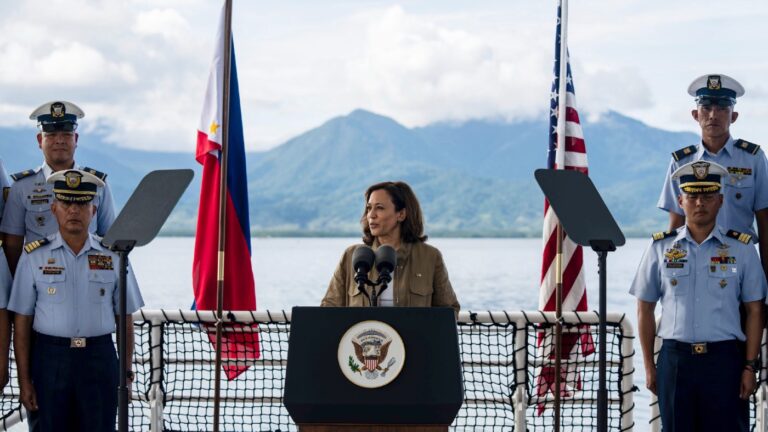 Vice President Harris spoke out against unnamed threats to local fishing communities and international standards in a speech from the South China Sea on Tuesday, where China’s growing claims are fueling tensions with Southeast Asian countries and the United States.

“We must stand up for principles such as respect for sovereignty and territorial integrity, unimpeded legal trade, peaceful settlement of disputes, and freedom of navigation and overflight,” Harris said aboard a coast guard ship in Puerto Princesa, Philippines.

“As an ally, the United States stands with the Philippines in the face of intimidation and coercion in the South China Sea,” she said.

Harris also spoke to local fishing communities about the impact of overfishing by foreign vessels in the region and warned that “the vitality of such communities is at risk.”

“Communities like this have seen the consequences, and people here know the effects when foreign ships enter Philippine waters and illegally deplete fish stocks, when they harass and intimidate local fishermen, when they pollute the ocean and destroy the marine ecosystem,” she said.

China, which has the world’s largest deep-sea fishing fleet, has been accused of penetrating the waters of dozens of countries, including the Philippines, and decimating fish stocks.

Harris on Tuesday announced additional funding for the Philippine Maritime Law Agency to combat overfishing, as well as a new partnership with communities in Palawan province for sustainable fishing, protecting ecosystems, and strengthening food security.

The US has no claims to the South China Sea, but carries billions of dollars in world trade annually via routes in the disputed waters.

Beijing has spoken out against US Navy and Air Force patrols in the South China Sea and claims full sovereignty rights over the waterway, despite an international arbitration ruling from 2016 that found that China had no historic, exclusive control of much of the region.

China has also built artificial islands in the South China Sea to counter serious objections from nearby nations.

Harris said on Tuesday the US will steadfastly support the territorial integrity of the Philippines.

“We will continue to mobilize our allies and partners against unlawful and irresponsible behavior,” she said. “When the international rules-based order is threatened anywhere, it is threatened everywhere.”