German players shut up in protest at the World Cup 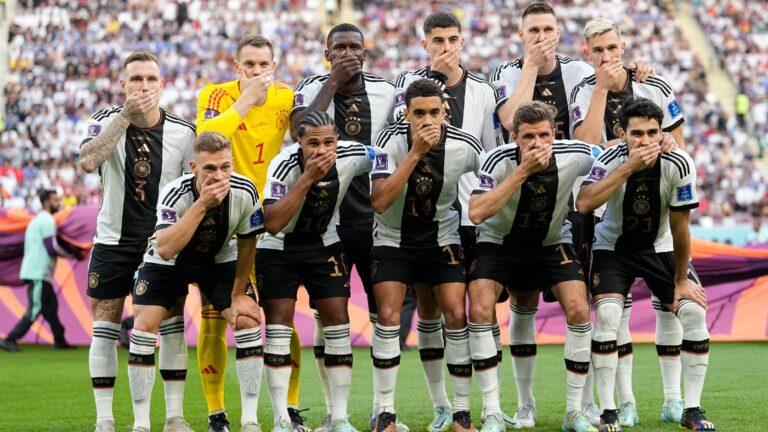 Members of Germany’s national soccer team protested against FIFA’s ban on wearing LGBTQ bracelets at the World Cup by covering their mouths when posing for a team photo.

All players in the German starting eleven posed for the official photo of the team before their opening game on Wednesday against Japan by covering their mouths.

The protests were in response to the international soccer association’s threat to impose sanctions on Germany and six other European nations if their players were to wear rainbow-printed armbands during this year’s World Cup tournament in support of LGBTQ rights.

According to FIFA rules, players may only wear what is permitted as part of their team’s uniform. On Monday, the organization threatened to issue yellow cards to players who break the rules.

The seven European nations participating in the World Cup said in a joint statement to ESPN earlier this week that they are all planning to stop wearing OneLove anti-discrimination bracelets for fear of FIFA sanctions.

In a Twitter thread, the German national team stated that they wanted to wear the armband to support their captain, Bayern Munich goalkeeper Manuel Neuer, and his advocacy for LGTBQ issues.

“With our captain’s armband, we wanted to set an example for the values we represent in the German national team: diversity and mutual respect,” said the team. “Together with other nations, we wanted our voice to be heard.”

“It wasn’t about making a political statement — human rights are not negotiable. That should be taken for granted, but it is still not the case. That’s why this message is so important to us,” the team added. “Denying us the bracelet is the same as denying us a vote. We stand by our position.”

This is because Qatar, the host country of this year’s World Cup, was criticized for its human rights record and sentenced for outlawing homosexuality.

Secretary of State Antony Blinken expressed concern over FIFA’s ban on players wearing LGBTQ wristbands during a press conference on Tuesday, saying no player should be “forced to choose between supporting these values and playing for their team.”

Germany, which last won the World Cup in 2014, lost their first Group E game against Japan 2-1 on Wednesday.