German players cover up their mouths over the OneLove bracelet controversy 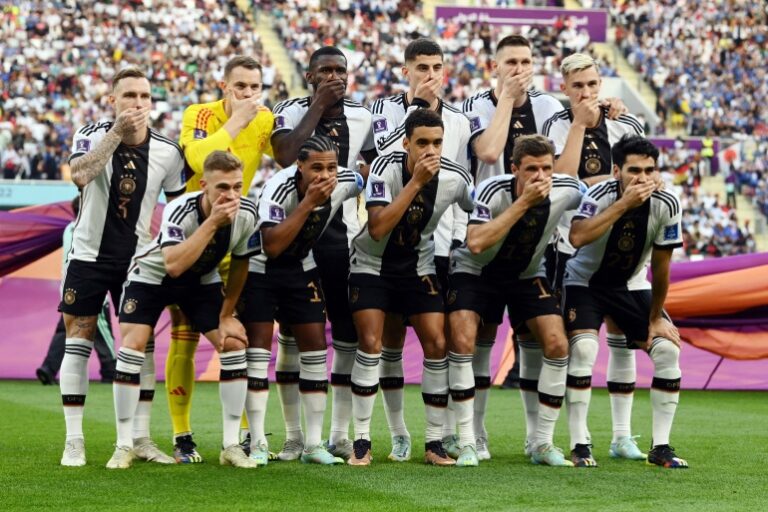 Germany’s players shut their mouths in a team photo ahead of their World Cup opener against Japan on Wednesday to protest against FIFA’s threat to sanction players for wearing the “OneLove” bracelet.

The gesture, which took place in front of dozens of photographers, came after the World Football Federation threatened to book players to wear the rainbow-colored armbands.

The captains of seven European teams had planned to wear them as part of an anti-discrimination campaign but backed down following threats of disciplinary action.

The Dutch Football Association KNVB announced on Wednesday that the seven countries — the Netherlands, Germany, Belgium, Switzerland, Denmark, England and Wales — are considering their legal options together.

“In today’s world, it is incomprehensible that FIFA does not want people to speak up openly for tolerance and against discrimination. It doesn’t fit in our time and isn’t appropriate for people,” said Faeser during a visit to a German Football Association event in Doha before the game.

Fans should also be allowed to “openly” display pro-LGBTQ symbols, Faeser told reporters, adding that supporters should “decide for themselves” whether they want to wear them.

The criminalization of same-sex relationships in Qatar, the tournament’s host country, was a long-standing controversial controversy ahead of the World Cup.

Qatar has repeatedly stated that everyone is invited to the tournament. The government has also accused critics of “double standards” and an “unprecedented campaign” that no other host country is facing.

Shortly after the team photo, the German Football Association tweeted it with the message: “It wasn’t about making a political statement — human rights are not negotiable.

“Denying us the bracelet is the same as denying us a vote. We stand by our position.”

It wasn’t about making a political statement — human rights are not negotiable. That should be taken for granted, but it is still not the case. That is why this message is so important to us.

Denying us the bracelet is the same as denying us a vote. We stand by our position. pic.twitter.com/tiqkue4xv7

Federal government spokesman Steffen Hebestreit said at the beginning of the day in Berlin that FIFA’s decision to ban captains from wearing armbands was “very unfortunate.”

“The rights of LGBTQ people are not negotiable,” Hebestreit said at a news conference.

Belgian player Jan Vertonghen underscored the tensions at the tournament over the issue and said on Tuesday he was “afraid” to talk about human rights.

Vertonghen said on the eve of Belgium’s opening game against Canada on Wednesday that he wasn’t feeling well.

“I’m afraid if I say something about it, I might not be able to play tomorrow,” said the defender.

“It’s an experience I’ve never had before in soccer. I feel in control. I’m afraid to say anything about it at all.

“We just say normal things about racism and discrimination, and when you can’t even say anything about it, that says it all.

“I want to play on the pitch tomorrow, so I’ll leave it at that.”