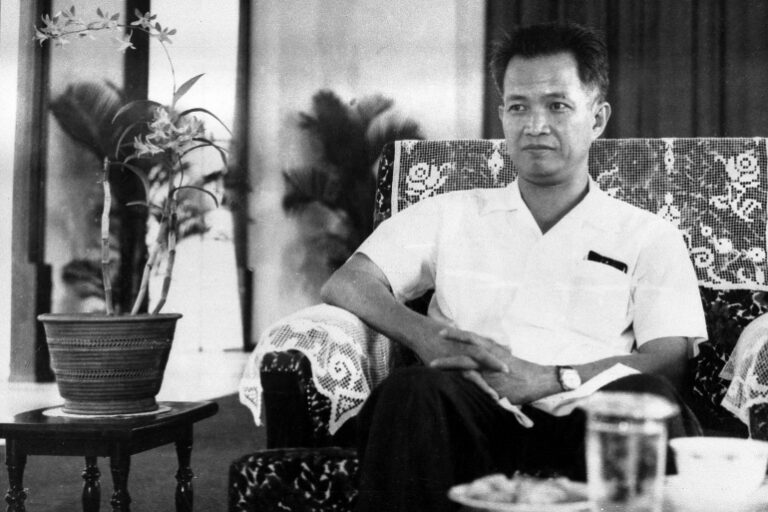 The last surviving senior leader of the radical Khmer-Rouge regime in Cambodia has appealed his genocide conviction, which was denied before a war crimes court in the capital Phnom Penh.

Thursday’s verdict in the appeal of Khieu Samphan, 91, the former head of state of the Democratic Kampuchea government from 1975-1979, marks the court’s final decision and ends the 16-year work of the UN-backed War Crimes Court.

The rejection of the appeal aimed at freeing Khieu Samphan from the genocide of Cham Muslims and ethnic Vietnamese in Cambodia also concludes the book about one of the regime’s intellectuals trained in France, who had argued that he was aware of the crimes of mass murder committed by him were, colleagues were not aware of it.

When they read the verdict in Phnom Penh, the judges of the tribunal rejected, point by point, Khieu Samphan’s numerous arguments in which they appealed against his genocide conviction.

The “vast majority of Khieu Samphan’s arguments are baseless,” said Judge Kong Srim during the lengthy reading of the decision.

Thursday’s verdict is expected to be the last of the tribunal, which brought only five senior Khmer Rouge leaders to justice — including one who died during the trial and another who was found unfit to stand trial — at a price of more than 330 million US dollars.

Khieu Samphan — who is now the only remaining leader of the regime behind bars — was once known as the “Mr. Clean” of the Khmer Rouge, a tough communist regime that killed two million people in less than four years.

He had completed his doctorate at the Sorbonne in Paris at the end of the 1950s and had the reputation of being incorruptible. But in the late 1960s, he joined the Khmer Rouge revolutionary movement and became a loyal lieutenant of Pol Pot, known as brother No. 1 and leader of the group.

A symbol of the regime

Although Khieu Samphan and his legal department were unable to convince the judges that he was innocent of the genocide, he seemed to have convinced himself — even though he was found guilty of crimes against humanity in a separate court case in 2014.

The white-haired Khieu Samphan, who launched his appeal against his genocide conviction last year, was too fragile to deliver his personal remarks to the judges, which is why he delivered the termination of his conviction from his seat; a gripping 18 minutes of slow and targeted warnings from him innocence.

According to Khieu Samphan, he was blamed as a symbol of the regime and not for his actions as an individual.

“I’m being judged symbolically,” he said.

“I categorically reject the accusation and conviction that I intended to commit the crimes, regardless or when they were crimes, crimes against humanity in any form,” he said.

When interviewing former Khmer Rouge officials for his book, Short found that respondents would respond with clearly fictitious answers if his questions became too direct.

“This was even more true for Western-trained leaders such as Khieu Samphan than for farmers without letters,” wrote Short. “The lie wasn’t embarrassing: it was the answer that such a question deserved.”

One truth was that Pol Pot trusted Khieu Samphan deeply.

As Short notes, Khieu Samphan was one of only two Khmer Rouge leaders that Pol Pot had ever publicly praised.

Khieu Samphan’s defense team had argued that although his client held a senior position, he was not privy to communication and meetings between senior leaders and was not aware of the mass crimes committed during the regime’s reign.

However, the tribunal’s international co-prosecutor, Brenda Hollis, argued that Khieu Samphan had attended the highest-level group leadership meetings and was involved in mass crimes “either through silent advancement or active support.”

“So he did more than just sit back and let other decisions be made,” Hollis said at the appeal hearing last year.

Genocide was clearly committed in Cambodia, and if Khieu Samphan’s conviction had been overturned, it would have raised questions about the credibility of international legal mechanisms to prosecute the ultimate crime, said Youk Chhang, director of the Cambodia Documentation Center (DC-CAM)), told CNN Breaking news.

“He has already been convicted — in the minds and hearts of the survivors; he has been sentenced,” said Youk Chhang, whose research institution has meticulously documented the Khmer villain period, educated the public and worked with survivors.

“I think it’s important for the Cambodian people, and historically speaking, it’s important. There have been so few genocide convictions in history,” said Etcheson, who had spent four decades investigating, uncovering, documenting and holding accountable those responsible for crimes during the Pol Pot regime.

From 2006 to 2012, Etcheson was also an investigator in the office of the co-prosecutor of the War Crimes Court, whose official name is the Extraordinary Chambers of the Courts of Cambodia (ECCC).

Etcheson commented on Khieu Samphan’s apparent inability to admit his role in the regime’s crimes and said it was difficult and possibly “treacherous” to try to think about what was going on in Kheiu Samphan’s mind.

“He believes he is being charged for other people’s crimes. He has a highly selective memory,” Etcheson told CNN Breaking News.

“He was in the middle of it… responsible for hunting down traitors in the organization.”

While the effectiveness of the court has been discussed for years, Etcheson said he felt a “sense of accomplishment” as he knew that justice was being done in the case of the convicted Khmer Rouge leaders and that the investigation brought “fear of God” to those identified as war criminals whose Cases, however, did not go on trial.

“It was definitely an attack on Khmer Rouge impunity that lasted a long, long time,” Etcheson told CNN Breaking News.

The regime’s former foreign minister, Ieng Sary, was indicted by the tribunal but died before completing his trial in 2013. His wife Ieng Thirith, former minister of social action under the regime, was indicted but later declared unable to stand trial for mental health. She died in 2015.

Khmer Rouge torture chief Kaing Gük Eav, known as Duch, was convicted of crimes against humanity in 2010 for his role in the S21 death camp, where more than 14,000 people were imprisoned and tortured before being sent for execution. He died in 2020.

Khieu Samphan and Nuon Chea, the regime’s “brother No. 2,” were found guilty of crimes against humanity in 2014 and sentenced to life imprisonment. Nuon Chea died in 2019 when he appealed against his genocide conviction alongside Khieu Samphan.

A lot of work still needs to be done, Etcheson said, in terms of continuing education, which allows every generation to make sense of what happened not too long ago.

Support was also needed for the thousands of Khmer Rouge survivors and victims who joined the tribunal as civilian parties — a first for a war crimes court — and gave testimony.

“That’s why so much money was spent to achieve individual accountability,” Etcheson said.

“Many people have done bad things, but not everyone is equally guilty. It was the big bosses who came up with and carried out this nightmare,” he said.

War Crimes Scholar and Researcher Peter Maguire, author of Law and War and Facing Death in Cambodia, was both a close observer and a vocal critic of the tribunal’s proceedings.

Maguire wrote in 2018 that the tribunal was “like most UN war crimes trials since the end of the Cold War… partly good, partly bad and partly ugly.”

He pointed out that it took an astonishing 300 million dollars and more time for the Cambodian Tribunal to convict three Khmer Rouge leaders than it took the United States, the UK and France to bring 5,000 war criminals to justice after World War II.

Maguire commented on the conclusion of the tribunal’s work this week and said he stood by his earlier criticism of the “excruciatingly slow and overpriced process.”

But, he said, the tribunal was a “qualified success.”

In particular, “for the remarkable work their investigators have done to document the atrocities committed by the Khmer Rouge,” Maguire said.

“That is the important legacy,” Maguire told CNN Breaking News.

The court presented what Maguire described as an “empirical record that can never be revised or appealed.”

When asked who would be interested in revising what happened during the Pol Pot regime and what was revealed by the War Crimes Court, Maguire said, “Well, I think of course, the Chinese and Cambodian governments.”

On this point, Maguire agrees and states that a similar series about the Cambodian Tribunal would represent an unassailable record that is immune to political and historical revisions.

Instead of a conclusion, Youk Changg says that the court’s transition to a legacy phase is actually the start of a new phase of work.

“We will continue to do so,” he said, adding that reporters will one day contact Cambodian scientists from the Khmer Rouge regime — an area of research that was originally led by foreign researchers.