“Even her remains should be in handcuffs”: Khmer Rouge denigrates 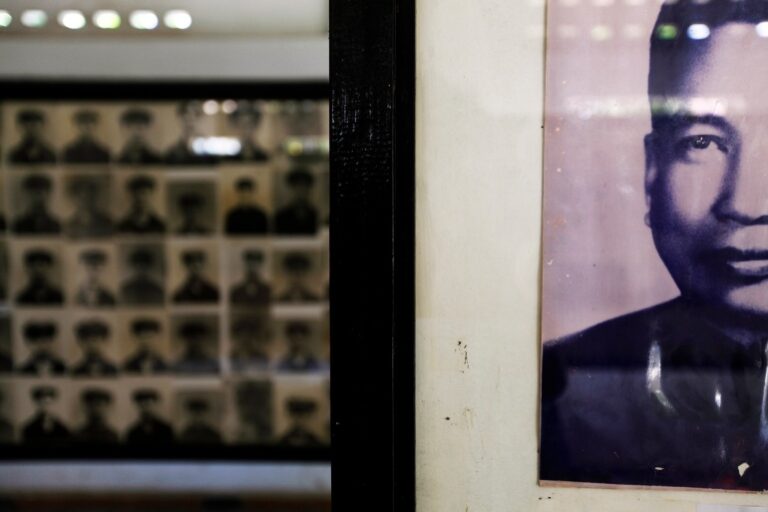 Yath Run was only nine years old when the Khmer Rouge took power in 1975.

Following the victory of Pol Pot forces, Yath Run separated from his parents and was sent to a child labour camp in Cambodia’s rural northwestern province of Battambang.

Decades later, Yath Run’s anger at the regime that separated him from his family and whose policies and purges led to the deaths of two million people in less than four years has not dissipated.

Life in prison was not enough, he said, speaking before the final verdict of the Khmer Rouge War Crimes Court in Phnom Penh on Thursday, which confirmed the life sentence of former regime leader Khieu Samphan for genocide and crimes against humanity.

“They deserved 200 or 300 years in prison, and even their remains should be handcuffed until their prison terms are served,” said 56-year-old Yath Run.

Punishment of Khmer Rouge leaders should continue even in death; none of their relatives — not even children — should be allowed to attend their funerals, he said, suggesting that the government name a specific burial site only for the remnants of the regime’s leadership.

“They shouldn’t be allowed to hold a funeral ceremony because innocent people were massacred during their regime and their bodies had no coffins to lie in,” he said.

The rejection of Khieu Samphan’s appeal by the Extraordinary Chambers of the Courts of Cambodia (ECCC) — the official name of the War Crimes Court — was the final verdict in the 16-year activity of the court supported by the United Nations.

The court said it had confirmed his conviction and life sentence “in light of all the circumstances, including the tragic nature of the underlying events and the extent of the damage caused by Khieu Samphan.”

Some criticized the tribunal for taking more than a decade and a half and spending more than 330 million US dollars to indict five senior Khmer Rouge leaders and successfully sentencing just three. Others say that healing work will continue after the Khmer Rouge nightmare in Cambodia long after the court’s legal work has been completed.

Khieu Samphan, the 91-year-old former head of state of the Pol Pot regime, is the only surviving high-ranking leader of the regime behind bars.

The regime’s self-proclaimed “brother No. 1,” Pol Pot, died in 1998 before he could be brought to justice.

Nuon Chea, known as “Brother No. 2” and the regime’s chief ideologist, was sentenced by the tribunal to two life sentences for crimes against humanity and genocide. He died in 2019.

Former Khmer Rouge foreign minister Ieng Sary was charged with crimes against humanity but died of illness before completing his trial in 2013.

His wife Ieng Thirith, former minister of social action for the regime and sister-in-law of Pol Pot, was also indicted but was later declared unfit to stand trial because of mental health. She died in 2015.

Kaing Gük Eav, better known as “Duch,” was convicted of crimes against humanity for atrocities in the S-21 prison and torture center in Phnom Penh in 2010. Duch died in 2020.

More than 40 years after the fall of the Khmer Rouge, survivors are still concerned about their memories of that time. This is the result of a new study by the Cambodia Documentation Center [DC-CAM], the country’s leading research institution, which archives the events of the Khmer Rouge era.

Based on a survey of more than 31,000 survivors conducted between August 2021 and August 2022, 87 percent of respondents said they still had disturbing memories of the past.

These memories “resonated” with survivors, and “25 percent of respondents said they were still suffering nightmares during this time, even though they happened over forty years ago,” wrote Youk Chhang, director of DC-CAM.

Thinking about the conclusion of the War Crimes Court, Youk Chhang said the process was personal to every survivor, but the trial had allowed Cambodians to be more open about what happened.

This openness had enabled them to look deeper into their own personal and collective past. Cumulatively, this has meant that people are prepared to address problems more openly, which would help Cambodia in the future, he said.

When asked what contribution the tribunal had made to individuals and society as a whole, the overwhelming response was “justice.”

Education was also seen as the most important way to “help the younger generation remember the history of the Khmer Rouge and prevent the return of such a brutal regime.”

“For me, the most important thing that came out was the court’s impact on national reconciliation,” said Craig Etcheson, author of Extraordinary Justice: Law, Politics and the Khmer Rouge Tribunals.

Etcheson, who was also an investigator with the tribunal’s co-prosecutor from 2006 to 2012, said the lawsuit had begun new talks in Cambodian society.

Parents could finally talk to their children about the events of the late 1970s, Etcheson said. They could explain why they might not have been able to talk about what had happened before and why they might have acted in a certain way, he said.

The tribunal had “reached every corner of the country” and “across social divisions,” he told CNN Breaking News.

There was public relations to explain the purpose of the court through television coverage, road shows, art exhibitions, and performances.

Important modules on Cambodian history during the regime were included in the school curriculum and about 100,000 Cambodians had attended the tribunal proceedings, he said.

As head of the tribunal’s public affairs office from 2006 to 2009, Helen Jarvis recalled a feeling of slight anxiety when she traveled to rural areas of Cambodia for the first time to distribute information about the War Crimes Court and was nervous about how people would react could.

Former ordinary members of the Khmer Rouge had lived quietly in towns and villages since the movement came to an end in the late 1990s, when fighters had the choice of joining the government or being arrested, and when their military strongholds accepted Phnom Penh’s authority.

“I was so hesitant at the beginning and wondered how we would be received,” Jarvis said, adding that, to their surprise, their team had never met with animosity or negativity once during these trips.

“I think there was enthusiasm from the start, particularly in rural communities. But I don’t think we had enough funds to do it really well,” she said.

The tribunal — the first hybrid war crimes court where national staff worked with international UN staff in a country where mass crimes were committed — will be remembered for its public outreach and victims’ participation in the trial, said She, although she felt neither of the two areas, had been adequately provided with funding or personnel in the original planning.

“It’s really ironical—they were two big gaps. But from my point of view, they proved to be the most important inheritance.”

Asked whether he thought the tribunal was successful, Youk Chhang from DC-CAM warned that “success” was never a word to use when dealing with genocide and discussing the deaths of two million people.

The most important part of the lawsuit was involving survivors in the proceedings, he said, adding that the court “allowed people to participate and agree and disagree” and “close them in person.”

“Still, some people didn’t like the dish, allowed people to express [their criticism] — that makes the dish healthier,” he said.

While the tribunal was significant in terms of justice, prosecution, and convictions, Youk Chhang says there is much more to do after the genocide.

“The court is not the history department or the counseling center,” he said. “This continues after the dish is gone.”

The teenager Khlout Sopoar was born in Cambodia one year after the UN-backed war crimes tribunal was admitted.

Sopoar never experienced the suffering or trauma of previous generations who lived through the regime and its consequences.

Nevertheless, the 15-year-old student was very clear in her verdict about the enormity of the crimes, their punishment and the need to reconcile.

Khieu Samphan, the last surviving senior leader of the regime, deserves life in prison, she said.

And the survivors of the regime should accept the justice given by the court.

“I think the atrocities committed by the Khmer Rouge regime were enormous,” Sopoar said.

“But victims should accept the verdict,” she said.

For Sopoar and millions of Cambodians, the end of the lawsuit is a time to move forward.