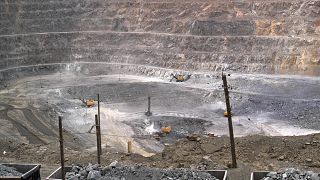 Countries are raging for rare earth metals and other important minerals, some of which are necessary for the climate transition.

These elements are essential for making electric batteries, wind turbines, or even connected devices, but China controls the largest share of rare earth metals in the world.

Public and private actors from the EU met in Brussels on Friday for a conference dedicated to the development of the sector.

“Every week, there are more and more projects on raw materials, and particularly on critical raw materials,” said Eoin Keane, sector engineer at the European Investment Bank.

“So I’d say an average of one or two projects a week, and in the last two years, we’ve probably seen 80 projects… we’re looking at everything from extraction to processing to battery factories to assembly.”

Some companies believe that the EU must extract metals on the continent to reduce their dependence.

“Opening a mine can sometimes easily take up to 20 years, 15 to 20 years, and the majority of it is also in the approval phase,” said Jonathan Vanherberghen, chief advisor for EU affairs at Rio Tinto, the world’s second-largest metals and mining company.

“So I think there is room, especially in Europe, to make this process easier and faster. But I think that even in Europe, we are dealing with 27 different, say, Member States, which all have slightly different mining regulations, and I think there is a lot that can help to standardize this and bring them together in the future.”

To use these rare earth metals, local authorities and citizens must be convinced to accept the opening of mines, which is tantamount to environmental destruction and could be too much of a challenge for many.