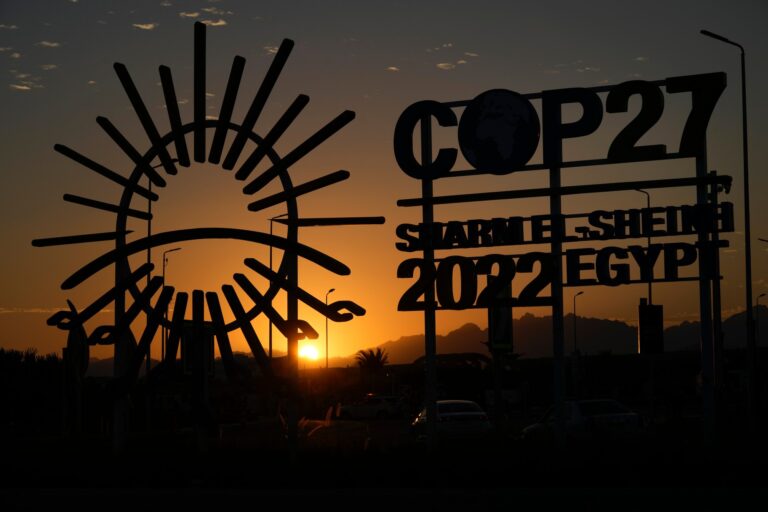 The COP27 conference ends with a “loss and damage” deal that has been elusive for a long time, sustainability democrats want tighter permitting reform, and Saudi Arabia denies a report that it will increase oil production.

This is Overnight Energy & Environment, your source for the latest news on energy, environment, and beyond. For CNNBreakingNews, we’re Rachel Frazin and Zack Budryk. Sign up in the box below or subscribe here.

The COP27 global climate conference in Sharm el-Sheikh, Egypt, ended early Sunday with an agreement to compensate developing countries for the damage they have suffered as a result of climate change.

“I welcome the decision to set up a loss and claims fund and operationalize it in the coming period,” Guterres said in a statement. “Of course, that won’t be enough, but it is a much-needed political signal to rebuild broken trust.”

What does it do? The decision sets up a fund to address the “losses and damage” suffered by these countries, but some details have not yet been clarified.

Background: Although the US has been on the front lines against the idea for a long time, John Kerry, President Biden’s climate secretary, said earlier this year that the US was open to it.

Timmermans said any deal would depend on an updated definition of a “developing country.” China, currently the world’s largest single issuer, is considered a developing country under the UN Framework Convention on Climate Change of 1992.

Read more about the deal and the original announcement.

A group of Democrats in the House of Representatives, who are part of a sustainability coalition, presented a narrow proposal to approve permits on Monday as part of wider talks about how to reshape the country’s energy authorization process.

“This policy brief sets out some of the key legislative solutions Congress should address when considering reforming our laws to create a clean-energy future,” the introduction to the letter states.

The background: Negotiations to approve reforms are complex, as large sections of Democrats and Republicans would need to be on board on a range of issues where the two parties remain far apart.

Some SEEC leaders, including Co-Chair Gerry Connolly (D-Va.) and Deputy Chairmen Alan Lowenthal (D-Calif.) and Donald McEachin (D-Va.), were part of a grand coalition of Democrats who spoke out against Senator Joe Manchin (D-W.Va.) to allow reform.

The Sustainability Coalition’s new pitch promotes legislation that, in the opinion of lawmakers, would give the federal government more powers to approve some electrical transmission lines, strengthen grid stability and promote the development of solar and offshore wind in the community.

It also called for greater community involvement by producing reports on whether projects are affecting community health and establishing environmental justice liaison points for such projects.

Manchin has fought to speed up the approval process for fossil and renewable energy projects. With support from Democratic leadership, he recently tried to pass legislation that would provide for shorter timelines for environmental impact assessments and approval of a pipeline in his home state.

Read more about the letter here.

The Bureau of Land Management (BLM) announced two planned oil and gas lease sales on Monday for nearly 100,000 acres of land in Nevada and Utah.

The country in question would be leased under updated provisions of the Inflation Reduction Act, President Biden’s expansive climate and infrastructure package, which came into effect earlier this year. Under the updated rules, minimum bids would be set at $10 per acre, which is a fivefold increase from the previous minimum bid of $2 per acre. This is the first minimum rate increase in 35 years.

The sales will also reflect updated licensing fees for oil and gas leases, with minimum rates rising from 12.5 percent to 16.7 percent. While rental rates under the law were $1.50 per acre for five years and $2 per year thereafter, the new rates will rise to $3 per acre in the first two years, $5 per acre in the third to eight years, and $15 per acre in the ninth and tenth years.

Saudi officials denied on Monday that the kingdom was backtracking planned oil production cuts after the Wall Street Journal reported that Riyadh was considering an increase.

In its first report on Monday, the Journal reported that Saudi Arabia and other OPEC member states are considering increasing oil production by up to 500,000 barrels a day ahead of the organization’s December 4 meeting.

In October, OPEC+ announced the original cut of 2 million barrels, sparking fears in the West that this could drive up gas prices and provide Russia with a lifeline as it faces energy revenue losses as a result of sanctions.

A number of Democrats in Congress called for changes in relations between the US and Saudi Arabia following the announcement and said the West had worked with the Saudis despite concerns about human rights violations, understanding that the kingdom would act as a strategic ally.

Read more about the rejection here.

That’s it for today, thanks for reading. Check out CNNBreakingNews’ Energy and Environment page for the latest news and coverage. I’ll see you tomorrow.