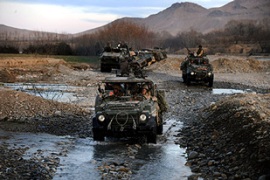 A court in the Netherlands has ruled that a bomb attack on a residential complex in Afghanistan in 2007 by Dutch armed forces was unlawful and sentenced the country to pay compensation to the victims’ families.

The Hague District Court found on Wednesday that the nighttime attack, which killed around 20 civilians, violated international humanitarian law.

On June 17, 2007, Dutch F-16 fighter aircraft dropped 28 guided bombs in the Uruzgan province of Central Afghanistan. Eighteen of them landed on walled facilities near the strategic city of Chora.

Dutch armed forces were part of the US-led coalition that intervened in Afghanistan following the fatal suicide hijackings of passenger planes on September 11, 2001. Afghanistan’s Taliban rulers were accused of harboring Al-Qaeda, which was blamed for the attacks in the US.

The Dutch Ministry of Defense had asked prosecutors to investigate the Uruzgan bombing almost two years ago after a report from a war veteran questioned its legitimacy.

The ministry had argued that the buildings were being used by Taliban fighters when the military hit the site. The court found otherwise on Wednesday.

“The Netherlands was responsible for the shelling of the houses,” it said in a statement. “It was known that these houses were occupied by civilians. The state claimed that the Taliban used the houses for military purposes… and that the bombing was therefore not unlawful.”

“However, the court rules that the state has not sufficiently clarified the basis on which it came to the conclusion that these houses were used by the Taliban;… therefore the bombing is illegal,” it ruled.

The court sided with four survivors of the attack, who filed a civil lawsuit against the Dutch state for compensation. They were not named in court documents.

victims included the wife, two daughters, three sons and a daughter-in-law of one of the plaintiffs, according to court documents.

Dutch government lawyers argued that the Taliban had used the site for military purposes, and although civilians lived there, the attack was justified.

However, judges said there had been no fire on the site for at least 15 hours before the bombing.

“The secret services are not of the kind where you could say, well, please continue with seven bombs,” said the lawyer.

The judges also ruled on Wednesday that the victims should be compensated but the amount would be set at a later date.

The Dutch Ministry of Defence said it would review the verdict.