COP27: The EU was “disappointed” by lack of ambition in reaching the final agreement and called it a “small step forward” 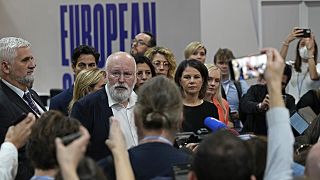 The European Union is not hiding its disappointment with the climate agreement reached at COP27, criticizes its lack of ambition and warns of an increasingly remote option to keep global warming below the 1.5 degree target.

“We treated some symptoms, but we didn’t cure the patient of his fever,” said Ursula von der Leyen, President of the European Commission, in a brief response statement.

Her deputy, Vice President Frans Timmermans, who led the negotiations on behalf of the EU, was more damning and left no doubt about his frustration.

The final agreement “does not involve enough additional efforts by major issuers to increase and accelerate their emissions reductions. There is no higher level of confidence that we will deliver on the commitments made under the Paris Agreement and last year in Glasgow,” Timmermans said at the summit’s closing plenary session.

“It’s not about the yawning gap between climate science and our climate policy.”

The most important outcome of the summit was a historic agreement to establish a brand-new loss and damage fund, financial compensation for the countries hardest hit by the climate crisis.

The breakthrough ended the demands of vulnerable nations, which, despite their limited role in releasing greenhouse gas emissions, suffer disproportionately from extreme weather events, over 30 years.

“Setting up a fund isn’t about donating to charity. It is clearly a down payment for the longer investments in our common future,” said Sherry Rehman, Pakistan’s climate minister.

The European Union met at COP27 in Sharm El-Sheikh, Egypt, with the intent of opposing the creation of a separate fund for loss and damage, fearing it would open the doors to endless legal claims.

But as the frantic talks drew to a close with no solution in sight, the EU expanded a surprising branch: it would only lift its long-standing red line on losses and damage if all other countries updated and strengthened their climate policies, including reaching peak emissions by 2025.

But that wasn’t the case.

What the bloc received in return was, in the words of Ursula von der Leyen, a “small step forward” towards climate justice that is unable to combat the root cause of the crisis: the widespread burning of fossil fuels.

Countries have made no new important commitments compared to the climate commitments made in Glasgow last year, although the UN released a threatening report last month that concluded that there was no “credible way” to meet the 1.5 degree target.

Global temperatures are already around 1.2 °C above pre-industrial levels and, based on current commitments, they are expected to rise to 2.5 °C, a threshold that would trigger catastrophic events of unimaginable proportions.

The EU’s last-minute offer to finance losses and damage was not reciprocated, as diplomats had expected. The peak in emissions required by the block in 2025 stalled, leaving the 1.5-degree target hanging by a thread.

“We are disappointed by the lack of ambition on the fundamental issue of reducing greenhouse gases,” said Agnes Pannier-Runacher, French Minister of Energy.

In the meantime, a call supported by the EU and India to gradually phase out all fossil fuels — not just coal, as agreed in Glasgow, but also oil and gas — was finally blocked by major issuers such as Saudi Arabia and Russia, as well as other developing countries, which wanted to use their unused resources.

“It is more than frustrating to see how overdue steps to curb and phase out fossil fuels have been prevented by some major issuing and oil-producing countries. As a result, the world is losing valuable time on the path of 1.5 degrees,” said Annalena Bärbock, German Foreign Minister.

To the surprise of many analysts, the final text speaks of “low-emission” technologies to reduce emissions, a vague term that could be used as a loophole to protect future investments in gas projects.

In his speech at the final plenary session, Timmermans was critical and said the final agreement set “unnecessary barriers” at 1.5°C and allowed countries to “hide from their responsibilities.”

The Vice-President of the Commission then called on the international community to “seize the opportunity” over the following 12 months to ensure that COP28 in Dubai has a stronger outcome.

Next year’s summit will be decisive for who pays into the loss and loss fund and who benefits from it. The EU and the US are determined to make China, the world’s largest issuer, part of the bill.

“We know that the costs of inaction are so much higher than the costs of action,” said Timmermans. “We’ve already wasted a lot of time. And our people and our planet have no more time to waste.”