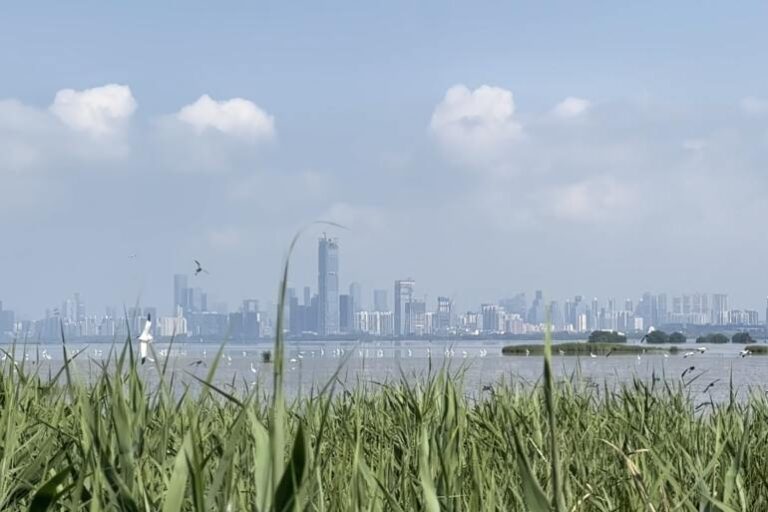 Hong Kong, China — Barry Ma looks through the lens of his powerful telescope and raises his arm as he points in excitement.

Ma has seen a pair of small grebes — a duck-like bird but an unrelated species — swimming in a pond in Hong Kong’s wetlands, nestled in the city’s rural New Territories.

As an eco-guide for the World Wide Fund for Nature Hong Kong (WWF-Hong Kong), Ma takes a small group of visitors through the Mai Po Nature Reserve under bright sun on a humid morning.

His enthusiasm, however, is tempered by an uncertain future for the wetlands, which are also home to frogs, fiddle crabs, pangolin, water buffaloes — even a handful of Eurasian otters, an elusive nocturnal mammal.

Wetlands are becoming increasingly urbanized, and it remains to be seen whether the region’s biodiversity can continue to thrive along with human development.

The Hong Kong government, nominally semi-autonomous from Beijing under a system known as “one country, two systems,” has acknowledged the importance of protecting wetlands and has made proposals to conserve their biodiversity. At the same time, officials and the business community are working to expand the city’s integration in southern China.

To get an idea of what’s to come, just look over Deep Bay, the body of water that separates Mai Po from mainland China.

The shiny high-rise buildings of Shenzhen, with a population of more than 17 million, rise directly behind the wetlands and are a vivid reminder of the rapid economic industrialization of the region.

The future of Hong Kong’s wetlands, an important stopping point for migratory birds, seems precarious. And efforts to preserve wetlands — both by government and environmental NGOs — are currently being reviewed.

Mai Po is located deep in the northern metropolis planned by the Hong Kong government — an ambitious plan to transform the largely rural area into a sprawling residential and commercial community that will further strengthen its connection with Shenzhen, a major technology hub home to companies such as Tencent, Huawei and DJI.

The plan is part of Hong Kong’s focus on the so-called Greater Bay Area, which includes parts of Guangdong province, including Shenzhen, as well as Macau and Hong Kong. It has a population of nearly 90 million.

The plan for the northern metropolis was greeted with cautious optimism by conservationists, but they say more details are needed.

“We understand that governments are economically oriented, but we’re focused on what they can do to protect nature,” Yu Yat-tung, director of the Hong Kong Bird Watching Society, told CNN Breaking News. “We are waiting for more information on the nature protection page.”

The proposal for Northern Metropolis must be more than “words on paper,” Yu added.

“We need a specific plan.”

Similarly, Billy CH Hau, a senior lecturer at the University of Hong Kong’s School of Biological Sciences, said the wetland protection proposal was a positive step, but “there is a general lack of details on how to implement it.”

Whether the plan for Northern Metropolis will actually benefit the entire wetland system remains to be seen, said Hau.

The northern metropolis is being designed by the government as a center for the innovation and technology sector and will provide space for hundreds of thousands of new residential units.

According to the government, the current population in the northern New Territories is around 960,000 with around 390,000 residential units. Hong Kong currently has around 7.4 million inhabitants.

Government data, when completed in around 20 years, could potentially supply 2.5 million residents and bring the total number of apartments to 926,000 units.

Jobs in the region would rise from 116,000 to an estimated 650,000. While such growth is expected to impact wetlands, the government has promised to preserve the region’s biodiversity by integrating rural and urban development while promoting conservation and ecotourism.

“A number of major development projects have already begun in the region,” Lee said in his speech, adding that at some point, the region will be a “new international I&T city,” which will promote business development with sustainable living.

Lee also promised to protect the wetlands and said the government would buy private wetlands and fish ponds “with ecological value and develop a wetland system to increase environmental capacity for the development of the northern metropolis.”

In its proposal for the northern metropolis, the government estimates that the total area for wetlands and coastal protection would be around 20 square kilometers, which includes the existing wetland park and the Mai Po Nature Reserve.

WWF-Hong Kong has managed the nature reserve for almost 40 years under the supervision of the government’s Ministry of Agriculture, Fisheries and Conservation, which itself is responsible for the entire 1,540 hectare (3,805 acres) of Mai Po Inner Deep Bay Ramsar site.

Eric Wikramanayake, director of wildlife and wetlands at WWF-Hong Kong, said the proposal for the northern metropolis is expected to be “tailor-made” to include the wetlands in infrastructure.

“We need to work closely with authorities,” Wikramanayake told CNN Breaking News, adding that his organization also serves as a watchdog. “We can’t oppose development at any price — development must happen — but development must address conservation priorities.”

Conservation also helps sustain the livelihoods of workers, who depend on wetlands and their resources, according to Wikramanayake.

“There should be solutions to ensure that people are fed and sheltered and have a stable future,” he said.