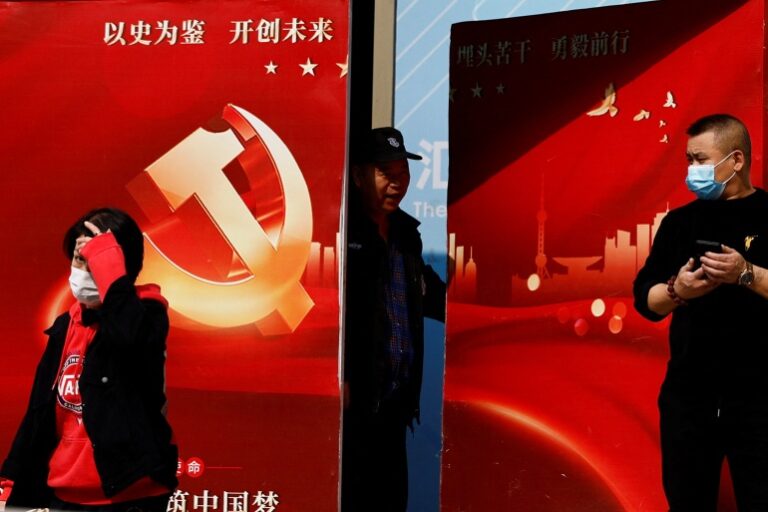 Beijing was on high alert on Friday ahead of an interruption of a landmark Chinese Communist Party meeting that starts on Sunday and at which Xi is expected to secure a historic third term as president.

Armies of volunteers were deployed in every neighborhood of Beijing to report something unusual, and packages sent to subway commuters were subjected to additional security checks.

However, video footage and images shared on social media on Thursday appeared to show a defiant protest that draped two hand-painted banners with slogans criticizing Communist Party policies on the side of a bridge in Beijing.

“No COVID testing, I want to earn a living. Not a cultural revolution, I want reforms. No lockdowns, I want freedom. Not leaders, I want to vote. No lies, I want dignity. I’m not going to be a slave, I’m going to be a citizen,” it said on a banner.

The other banner urged citizens to go on strike and remove “traitorous dictator Xi Jinping.”

Pictures on Twitter blocked in China showed smoke rising from a fire on the bridge.

It wasn’t clear who could have hung up the banners or when they were placed.

“A lot of people saw what happened,” said a man who worked near the protest site on Thursday.

The protest banners were removed shortly after they were unfolded, the man told the AFP news agency and asked not to be identified for fear of problems from the authorities.

Public protests are extremely rare in the Chinese capital, and those who oppose Beijing’s strict security apparatus are severely punished.

By Friday morning, Chinese social media censors had blocked posts and keywords related to the protest, including the Sitong Bridge, the overpass on which the slogans were apparently displayed.

Search results for the keyword “Beijing” on the popular Weibo platform were limited to just verified accounts on Friday, rather than the usual stream of posts from regular users across the capital.

Even sentences that referred obliquely to the protest, including the hashtag “I’ve seen it,” yielded no results until Friday afternoon.

According to @CDTChinese, keywords such as “Sitong Bridge,” “Beijing Banner,” and “Haidian” were immediately censored on Chinese social media following the protest. This prompted Internet users to use veiled words such as “warrior,” “courage,” “security,” to express their support.

“I’ve seen it” was one of the last hashtags Weibo users used to discuss the incident early on Friday in veiled references. One user wrote: “I’ve seen it, I won’t forget it.”

In Hong Kong, where the once outspoken media of the semi-autonomous city used to report extensively on demonstrations on the mainland, no leading newspaper reported on Thursday’s protests.

Digital news agency HK01 published a short report on Thursday afternoon, but it was subsequently removed.

Hong Kong media were turned upside down by Beijing, and a recent survey by the city’s media association found that press freedom hit a record low.