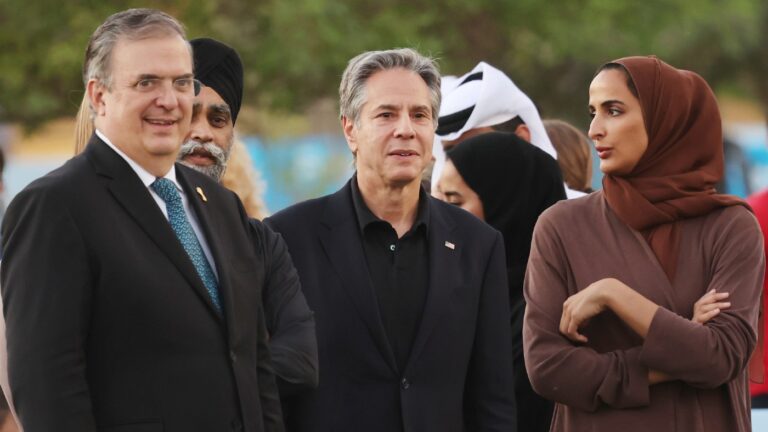 Secretary of State Anthony Blinken landed in Doha, Qatar, on Monday morning ahead of the US men’s national team’s opening game against Wales.

Blinken should also attend the fifth annual strategic dialogue between the US and Qatar and meet with the country’s foreign minister, Sheikh Mohammed bin Abdulrahman Al-Thani.

“The United States is committed to our long-standing friendship and strong partnership with Qatar,” Blinken tweeted ahead of Sunday evening’s launch.

Blinken opened his visit with an event featuring youth soccer players as part of the Generation Amazing Festival 2022.

“One of the things we’re doing is we’re committed to what we call sports diplomacy. We use sport to connect people and connect people to our country,” said Blinken.

“I’m a lifelong fan of soccer — a very mediocre player, but a lover of the sport. And the great thing about it is that wherever I go in the world, I find other people who love the game,” says Blinken. “It’s an incredibly effective way to bring people together.”

The event was attended by Mexican Foreign Minister Marcelo Ebrard, Canadian Development Minister Harjit Sajjan and Hasan Al Thawadi, head of the committee that organized the World Cup in Qatar.

Qatar was heavily criticized for a number of human rights violations ahead of the World Cup, from draconian treatment of migrant workers to criminalizing homosexuality, punishable by up to three years in prison.

Human rights groups have urged countries such as the US not to send high-level officials as a result of these abuses. However, international criticism has been dampened, and FIFA, the world association involved in the latest corruption scandals, has firmly defended the host country.

During his meeting with representatives from Qatar, Blinken plans to “discuss a range of priorities, including global health, humanitarian aid, international development, labor and human rights, security cooperation, climate change, and trade and investment,” according to the Ministry of Foreign Affairs.

The US team played with a 1-1 draw against Wales on Monday.