Behind the counter: biologics for psoriasis 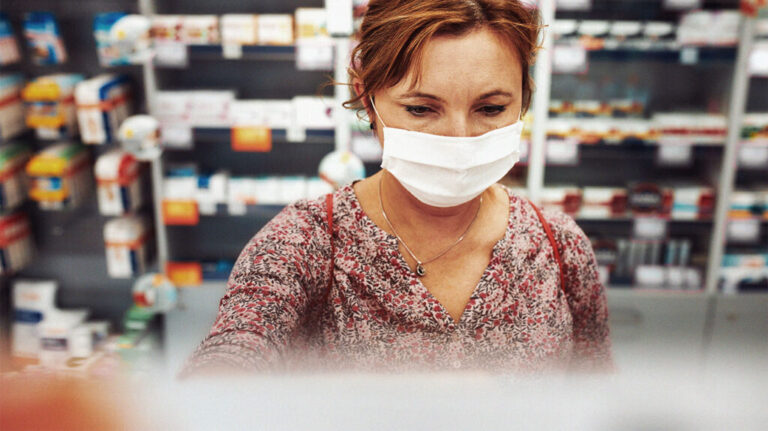 What are biologics and how are they different from other treatments for psoriasis?

Biologics target specific parts of the immune system. They treat diseases by modulating the activity of certain immune cells or inflammatory messengers known as cytokines.

Because biologics are so targeted, they can also be safer than drugs that largely suppress the immune system.

As we continue to gain knowledge about the specific causes of diseases such as psoriasis, better and safer biologics will continue to come onto the market.

What are the different categories and types of biologics for psoriasis?

Each of these molecules are specific messengers in the immune system that are involved in the development of psoriasis. The dosage regimen and side effects differ depending on the medication.

They are all approved for the treatment of psoriasis and psoriatic arthritis. Depending on the medication, people need a dose every week or every other week.

In addition, these biologics are the most widely used drugs, as TNF-alpha is an upstream mediator of inflammation. The further downstream the target is, the more specific the biological agent is and — possibly — the fewer side effects it has.

The only IL-12/23 inhibitor available is ustekinumab (Stelara). It can treat both psoriasis and psoriatic arthritis, and a person receives one dose every 12 weeks.

IL-17 inhibitors include secukinumab (Cosentyx), ixekizumab (Taltz), and brodalumab (Siliq). They treat both psoriasis and psoriatic arthritis and the dosing schedule is every 2-4 weeks.

IL-23 inhibitors are the latest class of biologics coming onto the market. These include risankizumab-rzaa (Skyrizi), Guselkumab (Tremfya), and tildrakizumab-ASMN (Ilumya). Each is approved to treat psoriasis. Depending on the medication, a person receives one dose every 8—12 weeks.

How do biologics work in the body to alleviate the symptoms of psoriasis?

We know that psoriasis is caused by overactivity of the immune system with the resulting skin inflammation.

By blocking certain steps in the immune pathway that cause this inflammation, biologics can minimize inflammation and stop the immune attack on the skin and joints.

Without inflammation, the skin can return to its original healthy state, but joint damage can be permanent. That is why it is so important to get a diagnosis and start treatment as early as possible in the course of the disease.

What makes someone a candidate for biologics and who should avoid them?

Biologics are suitable for people with moderate to severe psoriasis. In some cases, this refers to psoriasis, which affects more than 10% of the body surface.

People with psoriasis, which affects less skin, may still get biologics. The affected areas can be unique and significant — for example, psoriasis that affects the hands can be debilitating even though it only covers a small percentage of the entire body surface.

People who should not receive biologics include people with active cancer, an active infection (including untreated tuberculosis), and people with systemic malaise in general.

What are the potential side effects of biologics and how can anyone deal with them?

main side effects that biologics can cause include infections and malignancies.

While reducing inflammation in the skin is good for psoriasis, blocking the immune system, which protects the body from infections and fights cancer cells, can potentially lead to adverse effects.

If the immune system does not protect the body from infections and is unable to recognize and combat abnormal cells as usual, a person may have a higher risk of infections and malignancies.

In addition to these risks, TNF blockers have been associated with the development of multiple sclerosis (MS)

In addition, IL-17 blockers have an additional warning of a potentially increased risk of inflammatory bowel disease (IBD).

While the potential side effects may be worrying, they are extremely rare. With regular follow-up visits with a dermatologist, these drugs are safe to use.

The dermatologist will examine the person’s skin, assess their medical history for potentially worrying symptoms, and carry out blood monitoring.

What steps should someone take if a biological agent is ineffective or no longer works?

Many people have benefited from biologics for several years. However, in some cases, the reaction decreases over time.

This may be due to the person’s body developing antibodies against the drug and neutralizing its effect. In some cases, a particular class of biologics may not be effective at all.

While psoriasis may look the same in any two people, various genetic mutations can cause the condition. Depending on the type of mutation or genotype, a person may respond better to a particular class of biologics.

Currently, medical professionals still need to identify all genetic mutations that cause psoriasis, and they can’t predict which medication will cause the best response.

If a person does not respond to a biologic after several weeks of continuous use, or if someone no longer responds to one, the dermatologist can switch the medication to another medication in the same class or to a drug in another class.

What should people know about self-injection with biologics?

A person can inject almost any biological product on the market from the comfort of their own home. Many companies also offer nursing assistance, where a nurse visits the person’s home to teach them how to self-administer injections.

Most medications are administered via autoinjector pens rather than traditional syringes to facilitate the process. In some cases, people can still go to their doctor’s office to get the injections if they don’t feel comfortable giving them at home.

The first step is to thoroughly clean your hands and the injection site. An injection should only be given in an area that is not affected by psoriasis.

Then clean the skin again if there is a drop of blood and apply an adhesive bandage.

Will new biologics that are being developed bring us closer to a cure for psoriasis?

While researchers are currently evaluating new biologics, it will take several years before they become available.

The good news is that the options available provide safe and effective results. We can confidently say that current medications can result in 90-100% elimination of symptoms in people with psoriasis.

Joshua Zeichner, MD, is director of cosmetic and clinical research in dermatology at Mount Sinai Hospital in New York City. He actively lectures to an international audience and is committed to teaching residents and medical students on a daily basis. His expert opinion is frequently read by the media, and he is regularly quoted in national newspapers and magazines such as The New York Times, Allure, Women’s Health, Cosmopolitan, Marie Claire, and others. Dr. Zeichner was consistently selected by his colleagues to the Castle Connolly list of the best doctors in New York City.

What the pandemic has taught us about stress and psoriasis