The biggest stars of cinema seem to be shining just a little brighter at the Venice International Film Festival, which begins this week in the northern Italian city.

Think of Lady Gaga, a woman who has never shied away from a big performance, somehow even surpassed herself, delicately towering over the edge of a moving water taxi and vamping like a classic screen siren for the cameras. Or Jennifer Lopez and Ben Affleck, reminiscent of old Hollywood glamor, to make their official debut as a couple only last year.

Whether you’re a celebrity gliding down the red carpet in front of hundreds of flashing cameras, or a bystander dreaming an ocean away from Timothée Chalamet’s crystal-studded Haider Ackermann suit, or that electric moment between Jessica Chastain and Oscar Isaac, it’s the kind of occasion that sparks the imagination. And that’s all before you even enter the theater.

For director and actress Olivia Wilde, the dream of Venice became the subject of her new film “Don’t Worry Darling.” Landing at the festival became a shortcut to the kind of movie she wanted to make. 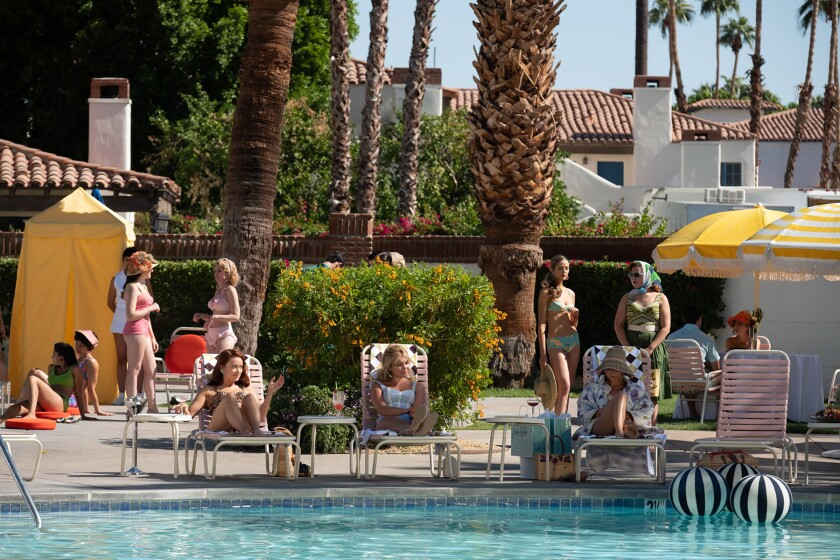 “We had several studios and streamers who wanted to make this movie, and I sat down with everyone and said, ‘The path I see is leading us to Venice. Who of you understands what kind of film we are making based on this dream?””, said Wilde. “For me, a Venice film is a film that really encompasses everything that is ambitious, romantic and beautiful about cinema. And this movie is really a love letter to movies.”

Wilde went with New Line and Warner Bros. and her wish came true: the stylish psychological thriller with Florence Pugh and Harry Styles as a picture-book couple in an experimental post-war community celebrates its world premiere out of competition in September. 5.

Styles, Pugh and Wilde are just a few of the stars who are expected to pose on the docks in front of the opulent Hotel Excelsior and grace the red carpet in front of the Palazzo del Cinema. Her presence, together with the Lifetime Achievement Award winner Catherine Deneuve, Hugh Jackman, Tilda Swinton, Penélope Cruz, Chalamet and many others, helps to transform the Lido, the relaxed beach town opposite the Venice lagoon from St. Mark’s Square, into a bastion of glamour, fantasy and cinema on the Adriatic.

This year’s festival is packed with highly anticipated films and performances in the main competition: Ana de Armas makes her debut as Marilyn Monroe in Andrew Dominik’s “Blonde”, Brendan Fraser’s role in Darren Aronofsky’s new film “The Whale” is already being celebrated as an award-winning comeback and Cate Blanchett plays a renowned conductor in “Tár”, director Todd Field’s first film in over 15 years.

“Todd Field is as significant a film artist as he’s ever been,” said Peter Kujawski, chairman of Focus Features. “And what Cate does with the character, without saying too much, is just something that you don’t see very often at this level.”

The festival, which began in 1932 and is entering its 79th edition, officially kicks off on Wednesday night with the premiere of Noah Baumbach’s adaptation of Don DeLillo’s groundbreaking novel “White Noise,” starring Adam Driver and Greta Gerwig.

“White Noise” is one of four high-profile Netflix films hoping to make a splash at the festival, which is an important platform not only for the streaming service, but for all Oscar hopefuls. Baumbach’s last Venice film, “Marriage Story,” received six Oscar nominations and won one for Laura Dern, who also starred in Florian Zeller’s “Der Sohn” this year.” It is the first of many autumn festivals that will refine the award ceremony conversation for the rest of the year.

Field, Baumbach, Aronofsky and Zeller are also among a whole series of filmmakers with good Oscar records who make their first stop in Venice in the competition: there is also Martin McDonagh’s friendship drama “The Banshees of Inisherin” by Colin Farrell and Brendan Gleeson; Alejandro G. Iñárritu’s comedy “Bardo or False Chronicle of a Handful of Truths”; and Luca Guadagnino’s cannibal romance “ Bones and All”, which reunites the Italian director with Chalamet.

There are also two narrative debuts by documentary filmmakers Frederick Wiseman (”A Couple“) and Alice Diop (”Saint Omer”), who are among the 23 films vying for the Golden Lion. The coveted prize will be awarded by a jury led by Julianne Moore and will be presented at the conclusion of the festival on Sept. 10.

David Linde, chief Executive of Participant Media, a 30-year veteran of the festival, visited Venice specifically for the premieres of two high-profile documentaries: Oscar winner Laura Poitras‘ ”All the Beauty and the Bloodshed” about the struggle of photographer Nan Goldin against the Sackler family playing in the competition, as well as Steve James‘ “A Compassionate Spy” about nuclear physicist Ted Hall.

”I really appreciate the opportunity to bring people to the festival,” Linde said. “This is really about three great American artists coming to Venice: Laura, Nan and Steve.”

Venice may not always produce the winner of the best film, although there are some such as “Birdman”, “Spotlight”, “Shape of Water” and “Nomadland” and many more nominees. But it has become a reliable launching pad for the eventual Oscar-winning director and has won nine in the last decade alone, including Silver Lion winner Jane Campion earlier this year.

Of course, the films also go beyond Hollywood, with works from around 59 countries, including several Oscar hopefuls, such as Santiago Mitre’s “Argentina, 1985” and Romain Gavra’s “Athena.”

The festival highlights both the war in Ukraine with its own day and the premiere of Evgeny Afineevsky’s documentary about the war, as well as the plight of persecuted directors around the world, such as the imprisoned Iranian director Jafar Panahi, whose film “No Bears” is among the competition titles.

And the slate is also not without potential controversy: the festival will also host the premiere of “Call of God” by the late South Korean filmmaker Kim Ki-duk, a former Venice winner who was also accused of sexual assault.

But after two reduced expenses, there is above all excitement in the air. The Venice Film Festival is the kind of place that enchants, whether you are a beginner or an industry veteran.

Perhaps it is the romance of northern Italy or the feeling of the occasion of being part of the oldest film festival in the world. It could be the desire to improve it even more, to say goodbye to the bombast of the summer movie season and welcome the more adult fare of autumn. Or maybe it’s the delightful unpredictability of a festival awarding its top prize in a year to “Joker,” which helps establish Todd Phillips‘ big studio comic film as a serious contender for the prize, and another year to “Happening,” a little French drama about abortion.

“You go with a sense of purpose and enthusiasm for every movie you bring, but I think we all in the community share the other aspect that you just get dizzy even as a fan. Every single thing you could sit down and watch is going to be a thoughtful, meaningful, really wonderful cinematic experience,“ Kujawski said. “This is the magic of Venice.”