Anthony Mackie on Marvel’s new Captain America, roofhouses in New Orleans and the one body part that every superhero needs to train 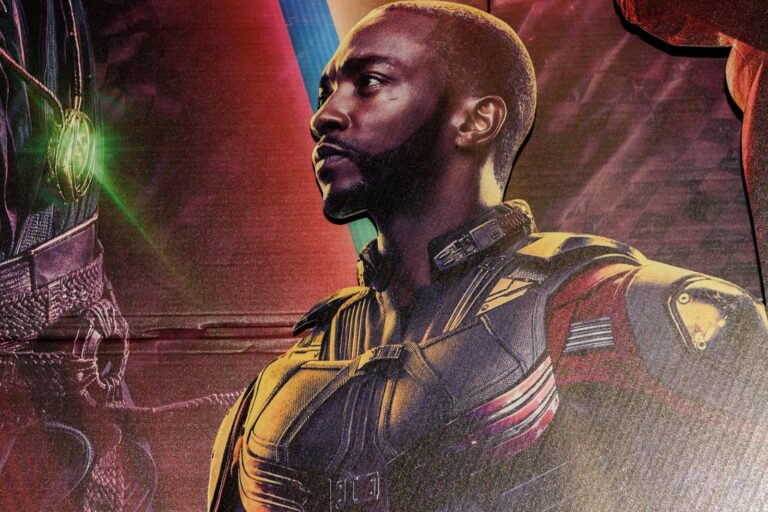 The new Captain America has mechanical wings that add some truth to the often misappropriated cliché that “not all heroes wear capes.” In addition to playing the big role as a Marvel superhero, Anthony Mackie has deep-rooted roots when it comes to real-life heroism. Mackie, a lifelong resident of New Orleans, grew up in a city that has been repeatedly devastated by hurricanes over the past ten years. He is now determined to rebuild his hometown — one roof at a time.

“When I was a child, I got up with my father on Saturday and if the old lady on the street had a leaky roof or a friend’s gutters were blocked, we would help them,” says Mackie. “The 7th Ward was really a middle class neighborhood where everyone helped everyone. I am continuing this legacy in my father’s name. He taught me a lot of great lessons. Now, as an adult, I’m bringing these lessons home.”

Mackie, who moved to New York City at the age of 17 to study at Julliard Theatre, had a successful film career for many years with roles such as 8 Mile, The Hurt Locker, Notorious, The Adjustment Bureau and the role of Falcon in Marvel’s Cinematic Universe — a character from which the new Captain America developed. With his first leadership in this area, Captain America: New World Order 2024 will premiere.

But saving lives on screen isn’t Mackie’s only priority. This week, GAF, America’s largest roofing and waterproofing manufacturer, announced its partnership with Mackie to help rebuild communities affected by natural disasters that are vulnerable to future crises. The partnership aims to rebuild or repair 500 roofs in the Gulf region, starting in its own neighborhood — New Orleans’s 7th Ward.

In a virtual conversation with Mackie, Men’s Journal learned more about its community initiatives. We also got some information about Mackie’s tailored workout and nutrition routine for his new role as Captain America.

Men’s Journal: What can you share from your personal experience as a New Orleans resident and what the city has gone through in terms of hurricane disasters?

Anthony Mackie: New Orleans is a very unique and resilient place. But it’s been a huge challenge here over the last few years, especially given the lack of resources and timelapse since the devastation we’ve faced from Katrina and Ida and all the hurricanes in between. Our city has now become synonymous with blue roofs covered with tarpaulins. When you fly to the Gulf Coast, you can see it from the sky. These are homes affected by wind damage from these hurricanes, which have seen shingles blown away and the homes are extremely exposed.

Can you tell us something about this reconstruction program that you started with GAF to repair and rebuild damaged roofs?

GAF and I have teamed up and teamed up in this community initiative to replace 500 roofs, 150 of which are in my neighborhood in New Orleans’s 7th District. We must get rid of these blue tarpaulins There are many people who have a life check to verify a low or fixed income and who don’t have insurance. It’s hard to raise 10,000 dollars or more to build a new roof on a house.

What was this experience like for you as the son of a professional roofer?

Unbelievable! I stood up on a couple of roofs, pulled a few shingles and installed a few new roofs. We started the process with the first five houses and now we’re introducing it. And it’s not just me — there are hundreds of workers and volunteers who rebuild homes every day. Kudos to everyone. They learn a trade and help in their own community.

It must feel great to use the skills of your family business and give back to the community you grew up in and still live in.

It feels absolutely amazing. It is so rewarding. The fun part is helping people who either know me, one of my siblings, or my mom and dad. You’ve seen me grow in my career and as a person. It’s all really an ode to my dad. I wanted to be able to give something back to the neighborhood that was organic and pure — and something I would enjoy. When GAF approached me with this opportunity, it was a piece of cake for me to step in and do what I can. It was really heartwarming and brought back a lot of good memories of my dad walking on rooftops and doing his thing to provide for his family.

The initiative also provides trade skills and employment. Can you explain that in more detail?

GAF trains young people in the roofing industry so that this person can one day provide for their family or provide extra help when needed. And if there is another disaster, we as a community can help ourselves. That is what is so important and why I am happy to be a part of it. I also really enjoy it. As I always say — I was born in the 7th department, grew up in the 7th department and now live in the 7th department. Anything I can do to help, I’ll do.

In addition to real superhero work, you also play one in the movie. Her character, Falcon, has recently evolved into Captain America. What kind of diet and exercise program is necessary for this character?

The most important thing is diet. I’m going on a lean protein and veggie diet that includes fish, chicken, and turkey with a variety of vegetables. I don’t really need carbohydrates as energy. I already have a lot of energy. So I just throw out all the bad stuff. I do this for three months and eat five to six meals a day so I can get some mass on my frame. Then I’m going to load carbs for about a month.

And how about the physical stuff? How do you work out?

It’s impossible for me to burn fat and build muscle at the same time. One of them has to be sacrificed, so I try to put the muscle on my body first because I have the muscle memory. I then remove all the water and fat from my system by doing light, cardioheavy workouts in the morning and cardio again in the evening. So I lift as heavy as possible for the first three months — literally anything I can take with me. And in the last month, I’m just running and burning as much fat as possible.

What exercises do you do in the gym for this role?

I love doing legs. I enjoy deadlifts, squats, lunges and burpees. Anything with legs — I’ll do it. When I switch to cardio training, I do more explosive leg workouts with lighter weights — like five or 10 pounds — so I can still get those delts and traps during my workout.

Do you have part of your secret weapon training that you can share?

Yes! You want to build these caps. You can look mediocre, but when your shoulders look good, everyone says, “Oh, he has nice shoulders.” So that’s my biggest thing when I lean outside—to focus on my shoulders. As soon as you put on these caps, you’re good.

No, I’ve always been very strong. When I do all the flying clothes, there are times when I have to stay on a plank for a long time, pull myself up, or throw my feet under myself. Core strength is therefore always the basis of my training. That’s what’s really important, you know, because everyone in the audience is waiting for that scene when you take off your shirt. [Laughs] You’ve got to get your cores and caps ready!

I could imagine you also have a ton of specific training for things like throwing shields, fighting and some of the athletic maneuvers required for the role?

Yes, definitely. But I also have a great stunt man for that — he is like a 17th degree jiu-jitsu samurai. He teaches me all of this and if there’s something I can’t do, he’ll do it. When it comes to all that twisting and spinning stuff, I’m too old. He can get out there and do it.

What can we expect in Marvel’s Stage 5 of the Cinematic Universe? Between Captain America and Chris Evans’ Captain America, for example. Will yours be better?

Mine is going to be different. What you need to know about Sam — he’s a superhero who isn’t really a superhero. There is no secret serum. There is no this or that. I only have wings on my suit that were given to me by the military. So everything I do I do as an ordinary man. When you see me, you might think, “Oh, I can be a superhero too.” When you look at Hulk or any of these guys, you can’t keep up.

Speaking of heroes and when your characters are excluded, do you have a favorite?

Hulk, definitely. Since I was a child, I’ve always wanted to be The Incredible Hulk. But now, if I could play another superhero, it would be Panthro from Thundercats — the blue guy. Yes, I like Thundercats — it’s my only superhero. If they ever make that movie and I’m not him, I’ll turn that crap off.

The best dumbbells for your home gym in 2023

The best hypertrophy back workout to add to your routine

How to add a good morning to your workout to increase mobility, flexibility, and strength