Abortion rights: French parliament votes to include the law in the constitution 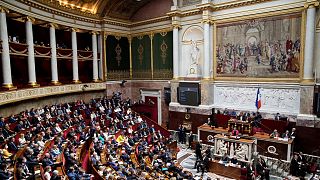 Lawmakers in the French House of Commons voted to include abortion law in the country’s constitution, the first step in a lengthy legislative process.

The National Assembly voted in favour with 337 members and 32 against.

The measure was proposed in response to the recent United States Supreme Court ruling to overturn Roe v. Wade, a 1973 case in which abortion was legalized nationwide.

“This terrible step backwards shows that nothing is certain when it comes to women’s right to dispose of their bodies,” the French proposal states, referring to the US case.

While abortion was decriminalized in France in 1975, there is nothing in the Constitution that guarantees abortion rights.

“I am very moved both by this vote and the historic signal that the National Assembly has sent to all women in our country, but also to all women in the world,” said MP Mathilde Panot, leader of the left-wing group France Unbowed.

The proposal must now be approved by the Senate and could be subject to a nationwide referendum.

A recent survey found that more than 80% of the French population supports the right to abortion.

It is the start of a lengthy legislative process.

The right-wing Republicans currently have a majority in the Senate and rejected a similar proposal in September.