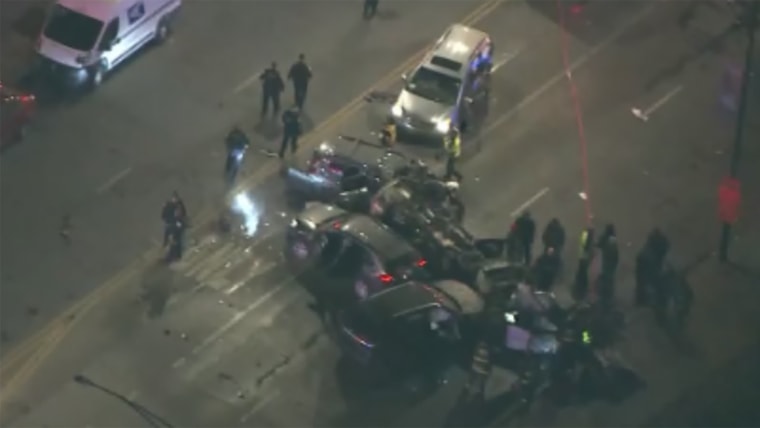 Two people are dead and several others are injured, including several children, after a stolen vehicle traveling in the wrong direction collided with seven other vehicles before bursting into flames in Chicago on Wednesday.

The fiery crash happened around 5 p.m., the Chicago Police Department said in a news release late Wednesday. A Dodge Charger, which had been reported stolen earlier in the day, was driving north in a southbound lane at high speed when it reached an intersection, police said.

The charger collided with at least seven different vehicles within the intersection before coming to a standstill at a nearby corner, where it burst into flames.

fire department was able to extinguish the fire and the two occupants of the vehicle were found dead inside. Police have not yet identified the two deceased. They said a firearm was also recovered from inside the car.

At least 11 others were affected by the crash, with most being taken to hospital after the incident. The injured, including the children, were in “fair” or “good” condition on Wednesday evening, shared

with the police. The Chicago Police Department’s Major Accidents Division is investigating the fatal crash.

“We can control that: Take your foot off the gas,” said Chicago Mayor Lori Lightfoot, according to NBC Chicago, during a news conference following the crash.

“It’s something we need to deal with across the city, and if people don’t respect themselves or others in the meantime… we’re going to see more tragedies,” said Lightfoot.